In a promotional video just released by the Fellowship of Christian Athletes, the organization makes very clear that its mission is to spread Christianity in public schools, even though proselytizing while on the clock is illegal. 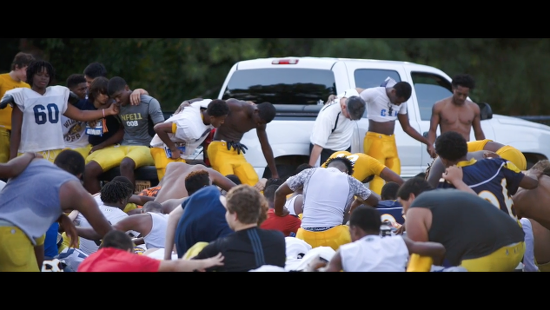 Here’s just a sampling of what you hear in the video:

FCA is a “foot in the door ministry and we help the church get into places where it can’t really go.”

“Get them when they’re in elementary school, middle school, all the way up through the professional and adult level…”

“We’ve really matured into a ministry that’s ministering to and through the coach.”

“The unique opportunity that coaches have in the school is that you’re planting seeds every day.”

“As a coach, I can impact my players a lot and, in turn, bring the players to Christ.”

“There’d be no way to identify the Christians on the public school campus, openly, if we didn’t have the Fellowship of Christian Athletes.”

“To go into public schools and open God’s Word and share our faith in the context of the classroom or the locker room or the gymnasium. I love that.”

Just imagine how Fox News would react if a Muslim organization spoke the same way about spreading Islam. And then realize no one’s going to raise a peep about any of this because we’re talking about Christianity. FCA isn’t even hiding the fact that their goal is get adults preaching to students within the context of a coach/player relationship.

If the group was simply a way for Christian students to gather and pray together, there would be no problem here. But that’s not what this is. It’s a way for Christians — mostly adults — to convert students on any given campus. That is the goal. And we’ve frequently posted about school officials crossing the line and breaking the law.

Tell me again why this group is allowed in public schools when they’re completely open about their plans to violate the law?

(via @cflfreethought. Thanks to David for the link)

January 7, 2017
Bryan Fischer: Anyone Who Opposes Publicly Posting the Ten Commandments is an "American Traitor"
Next Post