How hypocritical is the Religious Right? The hosts of the American Family Association’s “Today’s Issues” show answered that question in under 20 minutes yesterday while discussing incidents involving two singers. 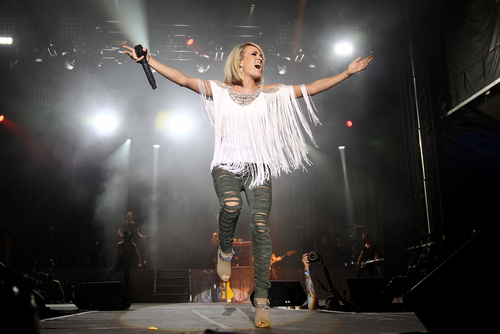 They were discussing gospel singer Kim Burrell‘s recent comments about how gay people were perverts who would burn in Hell by acting on their desires. Burrell was roundly criticized for her faith-based bigotry and disinvited from performing on Ellen.

Specifically, AFA’s President Tim Wildmon praised Burrell for speaking up and criticized the “thought police” for treating her like a pariah. She shouldn’t be punished for her religious views, he argued.

And then, minutes later, the hosts spoke about how Carrie Underwood recently made a surprise appearance at a Christian conference. The organizers never should have invited her, they explained, because she’s “openly embracing of homosexual marriage and the homosexual lifestyle.”

After Wildmon’s son, Walker, said that Underwood’s presence “spoiled the whole thing,” cohost Ed Vitagliano declared that her pro-LGBT views should have automatically “disqualified” her from having any part in the conference because those views are “not from God.”

For his part, Wildmon could not understand how organizers could allow Underwood to perform, saying the fact that they “lack discernment on something as important as sexual morality in this day and age by inviting somebody who embraces LGBT to sing to 55,000 young people is stunning.”

So if I have their Christian Logic right, people shouldn’t be punished just because the “thought police” don’t approve of their beliefs… unless those cops happen to be conservative Christians, in which case all punishments are justified.

Because everything is okay when they do it.

January 5, 2017
An Elderly Brazilian Woman Has Been Accidentally Praying Every Day to an Elf from Lord of the Rings
Next Post