The Next Secretary of Agriculture May Be a Former Governor Who Thought Prayer Would End a Drought January 3, 2017 Hemant Mehta

POLITICO reported yesterday that former Georgia Gov. Sonny Perdue, a Republican, was Donald Trump‘s leading choice to become the next Secretary of Agriculture. It’s concerning enough that someone in that position would have such an awful record on environmental matters.

Also disturbing? When Georgia was dealing with a drought in 2007 — an agricultural concern if ever there was one — Perdue’s solution was to hold a massive prayer. 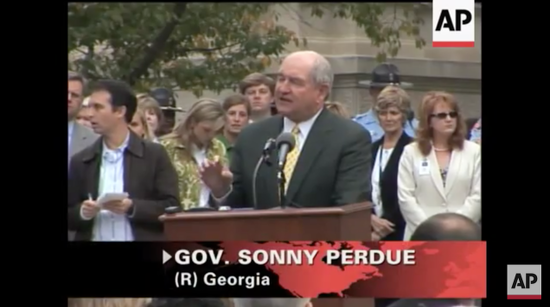 “We’ve come together here simply for one reason and one reason only: To very reverently and respectfully pray up a storm,” Perdue said after a choir provided a hymn.

“It’s time to appeal to Him who can and will make a difference,” Perdue told the crowd.

Rain did indeed come a couple of days later — just as meteorologists had predicted before the prayer service — and it did nothing to fix the impact of the drought. Because, wouldn’t you know it, temporary solutions don’t solve a long-term problem.

That’s the guy Trump may select to join his Cabinet. Along with his Secretary of Education nominee who despises public education, a Secretary of Health and Human Services who wants to take health insurance away from 20 million Americans, and a whole hell of a lot of climate change deniers.

Anyone who has credible solutions to real American problems has no seat at this table.

January 3, 2017
Creationist: The Story of Beowulf is an "Eyewitness Account" of Humans Interacting with Dinosaurs
Next Post