This Is What Having Sex Is Like When You’re Raised with Religion January 2, 2017 Hemant Mehta

Amelia B. and Victor Rosas II, writing at College Humor, give us the five stages of becoming sexually active after being raised with religion. 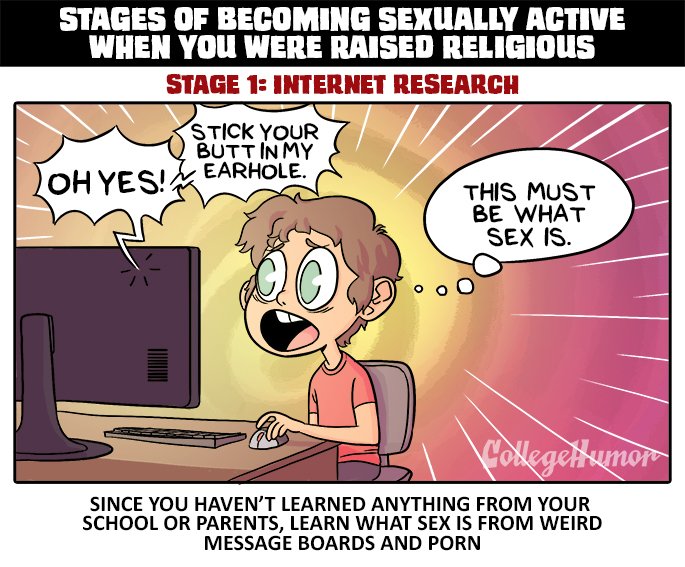 The rest of it is equally cringe-worthy (which is a statement about religion, not the artists).

It’s cruel how some faiths teach people to avoid sex — and everything leading up to it — at all costs before marriage. As if something bad is going to happen if you find pleasure in it beforehand. As if you’ve “giving up” some part of yourself by having it early. As if people who have pre-marital sex are somehow broken or sinners. As if sex is something you’re going to be magically amazing at on your wedding night despite having no practice ahead of time.

I’ve spoken to a lot of atheists who have gotten over being raised with religion, but depriving themselves of a healthy, safe, active sex life for all those years is something they continue to regret.

January 2, 2017
The Jehovah's Witnesses Next Door Are Working on This Atheist's Daughter
Next Post

January 2, 2017 Ray Comfort Says His Movie About Atheism Got an Honor from a Science-Themed Film Festival
Browse Our Archives
What Are Your Thoughts?leave a comment