Televangelist Jim Bakker said on his show yesterday that God was thrilled by the election of Donald Trump because Trump “stand[s] for Bible reading” in public schools. Bakker went on to complain about how Bible readings were removed from schools at all… failing to mention that they were mandatory, which is why they were deemed illegal, and that he would never be okay with it if we were talking about the Qur’an. 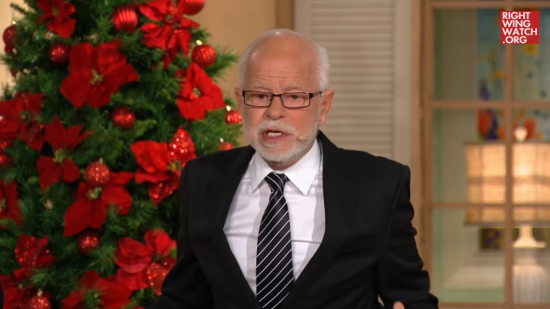 He went on to claim that Bible readings were removed from high schools and colleges and universities — which is a lie. Christians are welcome to read the Bible on their own time all they want, and no one’s going to stop them.

But it’s because of Trump’s support for Jesus that the forces of evil are acting against him:

“All hell is against this presidency,” Bakker said, because Trump stands for “righteousness.”

“Christianity cramps the style of this generation,” he added. “This generation wants to sin, mock God, kill babies, a million of them a year, and just do anything we want. They’ve decided to change marriage, the whole definition of marriage. I’ve got news for you: It still takes a man and a woman to make a baby.”

It’s a righteous man, I guess, who gets married multiple times and brags about assaulting women just because he can get away with it…

And if my generation was killing a million babies a year, they sure as hell didn’t call me about it, because I’ve killed zero babies as far as I can remember. I mean, the last two or three years, for sure. Bakker clearly doesn’t understand the different between a fetus and a child.

Somehow, Bakker was just getting started. He went on to say Britain has legalized “three-person marriage” — another lie — and that “pretty soon you’ll be able to marry a baboon.” Which makes you wonder what version of Tinder he’s using.

Bakker must be following the David Barton motto: It’s always okay to lie as long as you’re doing it for Jesus.

December 30, 2016
Democrats Shouldn't Pander to Evangelicals When Other Groups Are More Vital To Their Success
Next Post