Democrats Shouldn’t Pander to Evangelicals When Other Groups Are More Vital To Their Success December 30, 2016 Hemant Mehta

Michael Wear, the evangelical Christian who ran President Obama‘s religious outreach efforts in 2012, has a lot to say about where Democrats went wrong in 2016. In an interview with The Atlantic‘s Emma Green, he made clear that the party dropped the ball badly. By ignoring evangelicals entirely, he says, Democrats drove them — or roughly 81% of them — to embrace a man who gave them the lip service they wanted, even though his actions were reprehensible even to them. 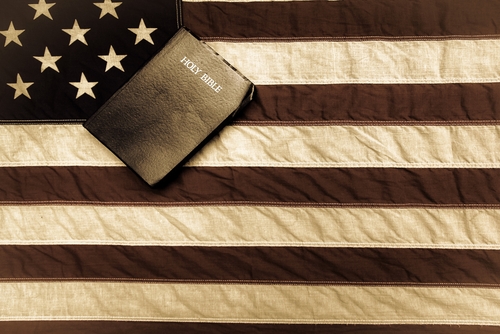 Many of those 81 percent are accommodating cultural changes in America that are deeply problematic. Liberals have been trying to convince Americans, and evangelicals in particular, that America is not a Christian nation. The 2016 election was evangelicals saying, “Yeah, you’re right! We can’t expect to have someone who is Christian like us. We can’t expect to have someone with a perfect family life. What we can expect is someone who can look out for us, just like every other group in this country is looking for a candidate who will look out for them.”

There’s a pragmatic aspect to his argument that makes sense. If you want to win votes, you shouldn’t write off any large group of people, especially evangelicals whose voter turnout is exceptional, even if most of them will be against you. You have to find a way to get through to them on the issues where you might find common ground — like immigration. Even with more contentious issues like reproductive rights, Democrats could have made a very compelling case that their policies — insurance coverage, early childhood education, access to contraception — would lead to fewer abortions. But the outreach wasn’t there.

That said, I think there’s value in seeing Democrats not pander to a group of people whose core beliefs are anathema to those of us who support civil rights for marginalized groups of people. I don’t want to belong to a party that suggests compromise is possible on LGBT equality or women’s rights. And I’d like to believe the more liberal wing of the Democratic party would be more eager to support a candidate who says those issues aren’t up for debate. Sure, make your presence known. But special outreach, if it means incorporating evangelical beliefs into the party’s platform or waffling on equality for everyone, would be a mistake.

Wear also neglects to mention that evangelicals, like a lot of conservatives, wrongly think Democrats are out to get them. When Democrats fight for LGBT rights, we’re not saying evangelical churches have to embrace equality or perform same-sex marriages. When we support choice, we’re not saying pastors can’t make a persuasive case against abortion.

It’s not Hillary Clinton‘s fault that there was so much misinformation out there, believed by so many people within the Christian church. Even if she had personally gone to evangelical churches around the country, it’s hard to imagine the reception would’ve been positive. I can just picture signs reading “baby killer” and “don’t tread on us” all over the place.

But when a former Sunday School teacher and her former-missionary running mate are spurned by religious voters who opt for the misogynistic bigot who brags about sexual assault, it seems only fair to pin the bulk of the blame on those Christians.

By all means, Democrats should figure out a way to reach out to religious voters in the future, but not if it means compromising on our principles. Conservatives would never do that. Donald Trump and Mike Pence didn’t reach out in any meaningful way specifically to the non-religious voters of the nation, because they knew it would only backfire. (It’s hard to spread lies to people who pride themselves on being critical thinkers.) They focused on their base — and their base turned out.

If lazy Democrats didn’t sit on their asses on Election Day, turned off by the Clinton email scandal that wasn’t, and if third party voters in swing states didn’t throw away their votes because they held onto some bizarre belief that both major party candidates were equally bad, we wouldn’t even be having this conversation.

As New York Magazine‘s Ed Kilgore says, forget the evangelicals. They’re a lost cause, and they’re not the only people who matter. Democrats would be wise to focus on liberal Christians and religious non-Christians, in addition to the non-religious voters who are already part of their base:

[Democrats] should reject the patently false idea that the only people in pews (and other worship settings) they should think about are those who look to Jerry Falwell Jr. and Franklin Graham for political direction. Maybe liberal Christians and non-Christians are not the wave of the future as compared to the religiously unaffiliated and those who are attracted to the culturally reactionary vision of conservative faith communities. But they should be viewed as low-hanging fruit for America’s liberal political party and given at least a fraction of the attention devoted to those who often seem to worship a God as angry as Donald Trump.

As the popular vote showed, the numbers are already on our side. And it’s not like evangelicals can get more conservative. We just need to do a better job of getting our side to understand why elections matter and then getting them out on voting day. Every election, to evangelicals, seems to be a do-or-die situation, and they take the privilege pretty damn seriously. Meanwhile, the rest of us are debating how perfect and pure the Democrat is — and then making idiotic decisions when we feel the candidate isn’t everything we want. Conservatives don’t make that mistake. They don’t love Donald Trump. They just know how to fall in line in order to achieve everything else on their agenda.

December 30, 2016
Humanist Group Gets "Ebenezer Award" from Conservative Group for Daring to Defend the Constitution
Next Post

December 30, 2016 Televangelist Jim Bakker Praises Donald Trump for Supporting (Illegal) Bible Readings in School
Browse Our Archives
What Are Your Thoughts?leave a comment