What Should a City Council Do if an Atheist Group’s Banner Is Stolen from a Local Park? December 29, 2016 Hemant Mehta

What Should a City Council Do if an Atheist Group’s Banner Is Stolen from a Local Park?

A “Let Reason Prevail” banner that was placed near a Nativity scene in Manassas, Virginia’s Nelson Park has been stolen, according to the Freedom From Religion Foundation. The wires connecting it to its posts were slashed. FFRF is offering a $1,500 reward “for information leading to the arrest and conviction of the perpetrator(s).” 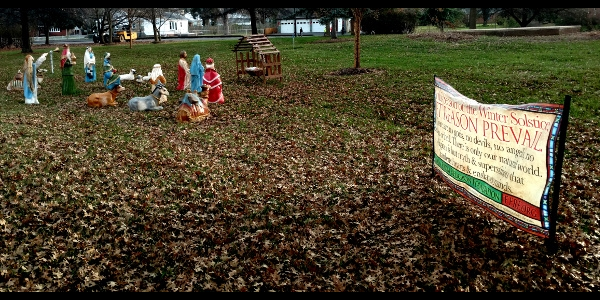 The theft raises another important question: If the city is offering a public forum for all religious and non-religious groups to put up their displays, but one group’s displays are continuously vandalized in some way, and the government isn’t doing anything about it, is it really a true public forum?

FFRF says it’s not and the city should reconsider its options next year:

Gaylor urged the city to shut down the “forum” next year.

It’s a fair point. It’s clear the local government isn’t doing anything to punish the vandals — they don’t even know who’s responsible. In effect, Christians are getting a free pass while non-Christian groups have to pay for upkeep and replacement of their displays. You can’t necessarily blame the city council for that, but they have an obligation to make sure all citizens are treated fairly, and the best way to do that in this case is by saying no to all third party displays in public parks.

December 29, 2016
A Preacher Who Got Rich Thanks To Her Gullible Followers Will Pray at Donald Trump's Inauguration
Next Post

December 30, 2016 A Rap About the Atheists in Your Neighborhood
Browse Our Archives
What Are Your Thoughts?leave a comment