Franklin Graham: Carrie Fisher and George Michael Are in Hell (Unless They Accepted Jesus)

Professional killjoy and Christian evangelist Franklin Graham wants you to know that actress Carrie Fisher and singer George Michael are burning in Hell right now. That is, unless they accepted Jesus on their deathbeds. 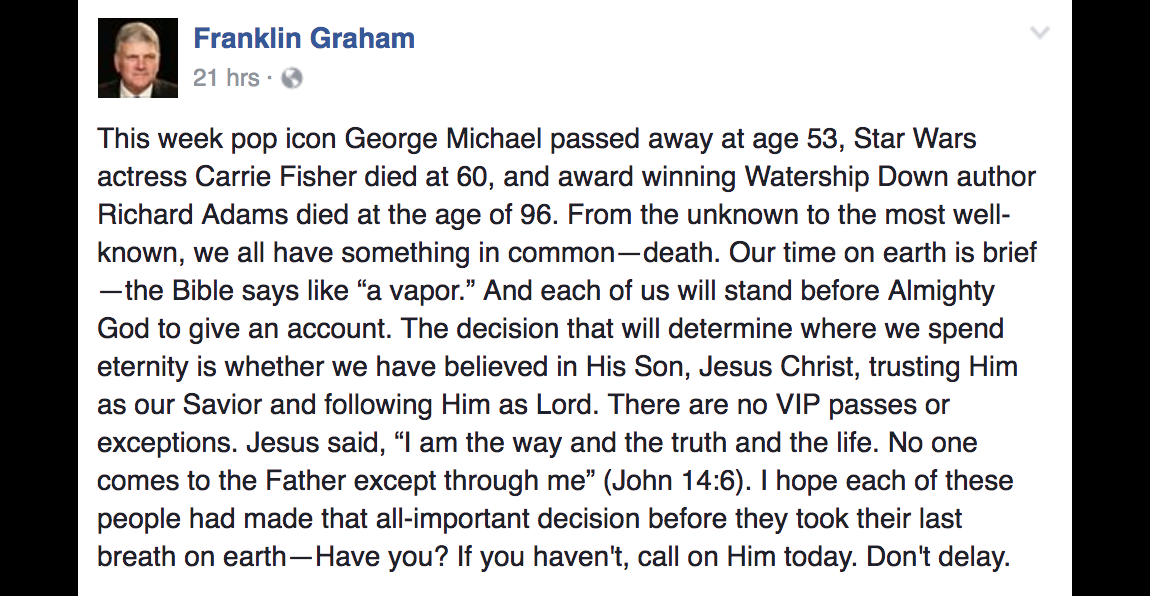 This week pop icon George Michael passed away at age 53, Star Wars actress Carrie Fisher died at 60, and award winning Watership Down author Richard Adams died at the age of 96… each of us will stand before Almighty God to give an account. The decision that will determine where we spend eternity is whether we have believed in His Son, Jesus Christ, trusting Him as our Savior and following Him as Lord… I hope each of these people had made that all-important decision before they took their last breath on earth — Have you? If you haven’t, call on Him today. Don’t delay.

This isn’t even typical Franklin Graham, the guy known for making absurd, over-the-top pronouncements. This is standard Christian fare. Even your kind Christian neighbors likely believe that Fisher, Michael, Anne Frank, Mahatma Gandhi, and everyone else who didn’t accept Christ during their lives are being tortured for all eternity — no matter how much good they did in the world.

The flaw isn’t just with Graham; it’s with any faith that teaches this lie.

December 28, 2016
The Noah's Ark Theme Park Has Not Led to an Economic Boom in Grant County, Kentucky
Next Post

December 28, 2016 "Heathen's Greetings" Banner Goes Up in Wilkes-Barre, Pennsylvania
Browse Our Archives
What Are Your Thoughts?leave a comment