Christian Hate-Pastor Steven Anderson, who celebrated the Pulse nightclub massacre by saying, “There’s 50 less pedophiles in this world,” is back with another disturbing eulogy, this time for singer George Michael. 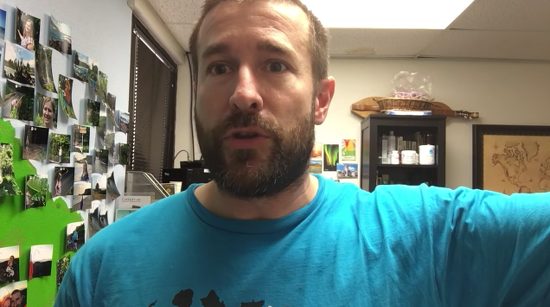 It only takes about ten seconds for him to get right into it.

First of all, George Michael’s burning in Hell right now. He was a very wicked, God-hating sodomite reprobate, and he’s getting the punishment that he deserves right now. It’s been pretty sad to see even Christians in some cases saying, “Oh, we lost another great celebrity,” you know? “Rest in peace” and all this kind of garbage.

Clearly, George Michael hated the Lord Jesus Christ and he was a sodomite reprobate. But not only that, he provides a great example of what sodomites are actually like, okay?

He was found out to be a sodomite, for those who weren’t smart enough to just look at him in the ’80s and see right away that the guy was a total faggot, but in 1998, he was discovered to be a sodomite because he was arrested in a Beverly Hills restroom where he basically solicited sex from an undercover cop… because what these sodomites do is not what you see on TV, where it’s wholesome and they just want to get married and be normal.

What they actually do is they troll for anonymous sex in places like public restrooms, and that’s why George Michael was busted on three different occasions, in three different cities… That just shines a light on the sodomite lifestyle for you.

There’s a reason why, according to AIDS.gov, in the AIDS 101 section, they’re 50 times more likely to get AIDS than your average person. And, by the way, that’s why George Michael died at an age of 53 years old, when the normal life expectancy for a man is 76. Because of the fact that, on average, the sodomite death-style shaves about 20 years off of your life expectancy…

If you just look at the lyrics to one of his most famous songs, one of his biggest hits, you can just totally tell this is written by a pedophile. Listen to lyrics from his song “Father Figure”:

That’s all you wanted
Something special, someone sacred
In your life
Just for one moment
To be warm and naked
At my side

Yeah, I guess love is mistaken for a crime when you’re a pedophile… It’s clearly written by a sick pervert because that’s what these homosexuals are: They’re a bunch of pedophiles. And you can look at the death-style of homosexuality all the way back to Ancient Greece and through the Roman Empire, all the way up until now, these people are pedophiles. They are depicted in the Bible as violent predators. Not as just nice kind people who just happen to be attracted to the same gender.

No, they go after strange flesh, they’re having anonymous encounters in dirty public restrooms. That’s what’s really going on with this death-style. You need to quit being brainwashed by the media and read Romans 1, read Genesis 19, read Judges 19, read 2 Peter 2, read the book of Jude, and get a biblical perspective on the sodomites, and quit mourning the death of this filthy pervert. He’s rotting in Hell right now for being a God-hating homosexual reprobate.

Just to clarify, Michael’s death was described by police as “unexplained,” though his manager said he died of heart failure. Not AIDS. Also, “Father Figure” is widely seen as a song about being gay at a time when it was a crime — and being dominant in a relationship. Not about being a secret pedophile. There’s no reason to think that Michael (or anyone at Pulse) was a criminal in that sense.

This is Bible-based hate in the mind of someone who assumes he’s interpreting God’s Book as it was always intended.

George Michael, unlike Steven Anderson, brought joy to millions of people. His quiet acts of charity are only now coming to light. His legacy will be remembered for a long time to come.

May we all live our lives so that people like Anderson demonize us after we’re gone.

December 29, 2016 Here's What an Atheist's “Let Reason Prevail” Banner Looks Like After It's Been Slashed Up
Browse Our Archives
What Are Your Thoughts?leave a comment