The Christian Persecution Card is Used to Sell Cars in Oklahoma

Those of you in Oklahoma have some really strange car commercials… I’m not sure if they want to sell me a vehicle or save my soul. 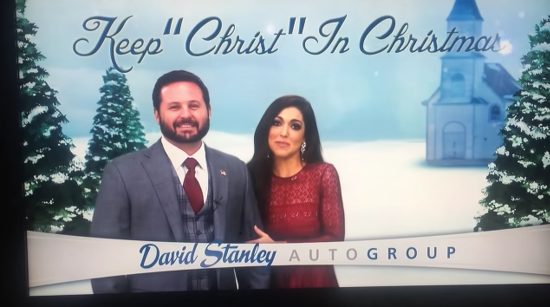 The man in that video, Rob Stanley, works for a company that has its own shady history, making his claims in support of conservative Christianity all the more hypocritical. Then again, the same evangelical base he’s catering to overwhelmingly voted for Donald Trump, so it’s not like we should take their professed “values” very seriously.

In any case, I hope they eventually get to wherever the hell they’re walking to.

(via Reddit. The man in the video was wrongly identified as David Stanley earlier. It’s Rob Stanley. It’s been corrected in the post.)

December 27, 2016
Pakistan is Now Home to a Shrine Honoring a Muslim Extremist Who Assassinated a Politician
Next Post

December 28, 2016 This Church May Want to Rethink the Message on Its Sign...
Browse Our Archives
What Are Your Thoughts?leave a comment