Pakistan is Now Home to a Shrine Honoring a Muslim Extremist Who Assassinated a Politician December 27, 2016 Hemant Mehta

In 2011, the governor of Punjab, Salmaan Taseer, was assassinated for the “crime” of criticizing Pakistan’s blasphemy law and defending Asia Bibi, a Christian woman who had been (unfairly, it seems) handed a death sentence under that very law.

Taseer’s assassin was Malik Mumtaz Hussein Qadri (below), who was executed earlier this year. But that execution prompted a surprising reaction. An estimated 100,000 people attended Qadri’s funeral, paying their respects to a man who defended Islam against so-called blasphemers. 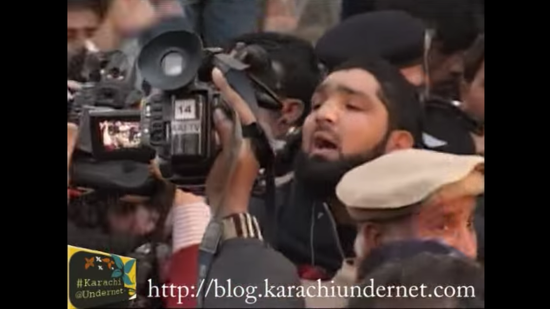 It even inspired a shrine in his honor. Adil Pasha, writing for Pakistan’s English-language publication Dawn, recently visited the site and has this disturbing report:

It is chilling; the sense that Qadri’s shrine is becoming more than a place of burial to some. That it is believed to be a haven for those who subscribe to the ideology that lead to the governor’s murder.

It has hardly been a year since his execution yet the process of his canonisation is utterly complete. While the outcry against his trial and execution and the subsequent construction of this shrine might bewilder some of us, in the hearts and minds of his sympathisers Qadri’s saintly status is beyond question.

No fringe group has 100,000 members and rarely do they have the sort of money that can build a shrine like this. Pasha notes that the “Mumtaz Qadri Shaheed Foundation” raised more than 80,000,000 rupees ($1,178,291 USD) in the 24 hours after his funeral. Qadri’s crime is still being celebrated by huge swaths of Muslims in the region.

Meanwhile, the governor who opposed the nation’s blasphemy law was murdered without being made a martyr, and the woman he died defending remains in solitary confinement on Pakistan’s death row.

Common sense is nowhere to be found. And religion, once again, is to blame.

December 27, 2016
Snopes Remains a Credible Fact-Checking Site (So Don't Let the Critics Distract You)
Next Post

December 27, 2016 The Christian Persecution Card is Used to Sell Cars in Oklahoma
Browse Our Archives
What Are Your Thoughts?leave a comment