Kittredge Cherry, a retired lesbian Christian pastor, has long argued that people need to understand that Jesus came from a non-traditional family.

Given that Mary was a virgin, you could say Jesus had two daddies (God and adoptive parent Joseph). And since Mary gave birth without having sex with Joseph, you could say she’s doing what many lesbian couples do nowadays. The point isn’t that Jesus had two moms or two dads — only that Christians ought to expand their ideas of what Jesus’ family was like.

But that’s a hard point to make without a helpful visual to go with it. That’s why, a few years ago, Cherry began promoting Nativity scenes with two Josephs or two Marys: 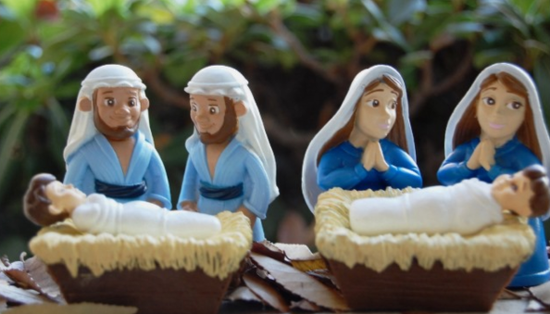 This year, artist Mark Thaler turned those images into ornaments and began selling them online (reportedly without Cherry’s permission, though that’s another story). But when a conservative Christian group complained, he buckled and took them down.

“These decorations are a desperate and ridiculous attempt to pretend that homosexual relationships are pure and holy,” Andrea Williams, Christian Concern’s chief executive, told the British newspaper The Daily Mail. “They blasphemously portray the Lord Jesus being parented by a homosexual couple. What depths will the LGBT lobby stoop to in order to try and normalise their behaviour?”

A smarter executive, not blinded by anti-gay animus, would have said, “We’re glad this artist is bringing more attention to the birth of Christ, even if he chose to use same-sex parents. We don’t support homosexual relationships, but we all agree the world is better off because Jesus was in it.” Instead, we got more of the usual Christian bigotry.

All the more reason to buy some of Cherry’s cards or ornaments. Talk about a conversation starter!

December 25, 2016
The Mormon Tabernacle Choir Is Making a Big Mistake By Performing at Donald Trump's Inauguration
Next Post

December 25, 2016 Louisiana Football Team Criticized After Posting Video of Baptism
Browse Our Archives
What Are Your Thoughts?leave a comment