Reader Bradlee was driving through Amarillo, Texas, when he saw this disturbing billboard saying “Vaccines can cause autism” (subtitle: “Choose Intelligent Design”). 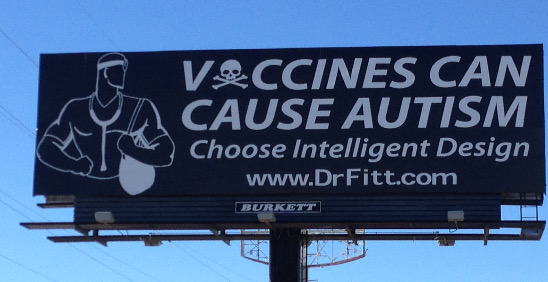 The signs — there are at least two of them — have been up for over a month, and a lot of local residents are rightfully infuriated. Not that “Dr. Fitt” gives a damn.

“It really concerned me when I saw it, because I was like people are going to see this and believe it without doing their own research and doing their own investigating, without talking to their own doctors,” Parent Tashi Haley said. “It just made me upset seeing it.”

The sponsor of the sign, Roby Mitchell M.D. or Dr. Fitt, claims there is evidence showing a link between vaccines and autism and what he is putting on the sign is nothing new. He said he just wants parents to be informed.

Sadly, the only parents who might be “informed” by this sign are the same ones who think Jenny McCarthy offers credible medical advice. They’re the ones who don’t trust or don’t listen to real scientists and whose kids are going to suffer. And if their kids aren’t vaccinated, we could all suffer.

To state the obvious: There is no link between autism and vaccines. None. And Intelligent Design, in whatever context it’s meant, is also a scam.

Dr. Fitt, by the way, isn’t even a doctor anymore. His license was revoked in 2012 after he prescribed “colostrum bovine treatment” to cure cancer. He’s also been in legal trouble of a different sort a couple of times before.

Not exactly someone whose judgment is worth trusting.

December 24, 2016
Christian Columnist is Furious That Someone Quoted Him As Saying "Oh god"
Next Post

December 24, 2016 This Was a Nice Family Gathering Before You Came Along, Neil...
Browse Our Archives
What Are Your Thoughts?leave a comment