Religious displays aren’t allowed in the Massachusetts State Capitol building, but State Rep. James J. Lyons Jr., a Republican, wanted to change that. He submitted an application to put a Nativity scene in the building, received a rejection from the Bureau of the State House, then threatened to file a lawsuit with the help of the conservative Thomas More Society.

He eventually got the approval he wanted. The Nativity will be up in the Capitol for a few hours this afternoon beginning at noon. Clergy members will arrive a little later to bless it. It’s quite a victory for a state representative with the sort of access outside groups could only dream of. It certainly helped that Lyons was able to avoid all the hurdles the rest of us would have to jump over to put up a display of our own. It’s far too late now for an atheist group to push back with a sign.

What prompted Lyons to push for the promotion of Christianity?

Maybe it’s the fact that the Boston Atheists, at the exact same time, will be putting up a banner in historic Boston Common — something that’s been in the works for weeks. 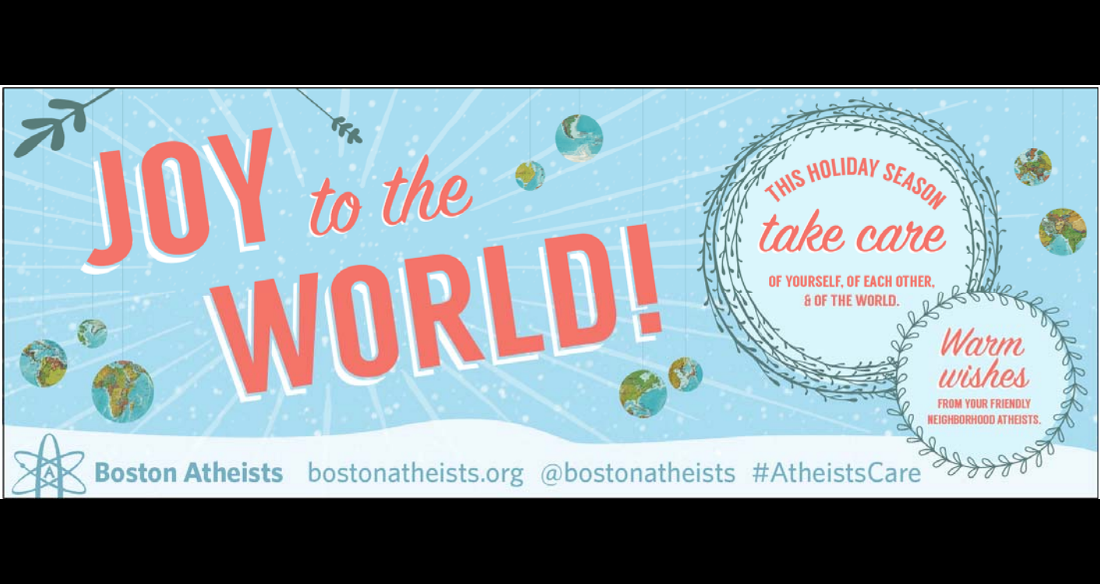 The Boston Atheists banner, designed by BA member Danielle Chapdelaine, is emblazoned with the message: “Joy to the World! This holiday season, take care of yourself, of each other, and of the world. Warm wishes from your friendly neighborhood atheists.”

Curse those divisive, mean-spirited, angry atheists and their message of love and generosity…

Leaders of the Boston Atheists said today that if Lyons tries this trick again next year, they’ll be ready to respond in kind — and it won’t be with a lawsuit.

If the good Representative feels he must pursue a similar action next year, we’ll not oppose him with anything so divisive as a lawsuit. Instead, we’ll look to him to support our organization’s efforts to place a celebratory statue of the Satanic Baphomet in the State House in the same week, if even for a single day. The values represented by Baphomet are ones we can ALL celebrate, whatever our philosophical views: the importance of pluralism; the importance of rationalism; and the ever-present need for there to be always in society persons with the courage to speak truth to power, including and perhaps especially in the form of blasphemy.

These are values truly in keeping with the spirit of the season… especially when compared to tactics like the threat of lawsuits. (We’re looking at you, Thomas More Society. You darn Scrooges.)

For what it’s worth, I see nothing wrong with lawsuits if there’s discrimination afoot. Atheist groups have won a lot of victories this time of year against local and state governments who use taxpayer-funded resources to promote Christianity to the exclusion of everyone else.

But a Baphomet statue in the Massachusetts State Capitol next year? That would be so much sweeter — and we’ll have James Lyons to thank for it.

December 22, 2016
Catholic Exorcist: Here's How I Know the Difference Between Mental Illness and Demon Possession
Next Post

December 22, 2016 Christian Woman: God Told Me Not to Buy Fried Chicken for a Homeless Man and He Was Right!
Browse Our Archives
What Are Your Thoughts?leave a comment