***Update*** (from Hemant): The Anti-Defamation League said tonight that this story is false and that the Jewish couple left town on a pre-scheduled vacation, not because of this incident.

“News reports alleging that a Jewish family has ‘fled’ Lancaster County are untrue and damaging,” said Nancy Baron-Baer, ADL Regional Director. “We spoke with the family, who explained that they went on a previously-planned vacation for the holidays. Stories like this can sow fear in the Jewish community and beyond, and it is important to stop the spread of misinformation.

“There is no truth to the rumor that the school cancelled A Christmas Carol at the request of parents. The Hempfield School District released a FAQ clearly stating that the play was cancelled due to the inordinate amount of class time taken up by rehearsals. We commend the district for setting the record straight.”

While we’re happy to correct that record on this site, the original story it’s based on, that conservatives overreacted to the cancellation of the play for false reasons, still holds true as far as we can tell.

***Update 2***: Lancaster Online, the outlet that initially reported this story, stands by what they said.

The parents told the Anti-Defamation League Thursday they were traveling on a previously planned vacation. The family told LNP and LancasterOnline their child was being harassed and blamed for the cancellation of “A Christmas Carol,” and that they were concerned for their and their child’s safety.

Earlier this week, several conservative news outlets — namely Fox News (with Todd Starnes), Breitbart, and The Blaze — published articles suggesting that a production of “A Christmas Carol” at a school in Lancaster County, Pennsylvania was canceled because some evil Christmas haters were mad about the part where Tiny Tim says “God bless us, every one.”

That wasn’t true. The production was canceled because students and staff were required to participate in it and administrators decided they just didn’t have time to pull it off while also accomplishing their academic goals.

Unrelated to all that was the fact that a Jewish family had asked back in September if it would be okay for their child not to participate in the production; they had been told yes.

So when this school began receiving unwanted attention this month as if it was the epicenter of the “War on Christmas” — it’s been inundated with over 200 phone calls from outraged conservatives — the Jewish family in particular suffered a lot of the wrath online. News articles said two parents complained about the religious context of Tiny Tim’s line and it was assumed by conservatives (rightly or wrongly) that the Jewish couple were those parents. The always-charming commenters on Breitbart even made comments asking who they were and where they live. 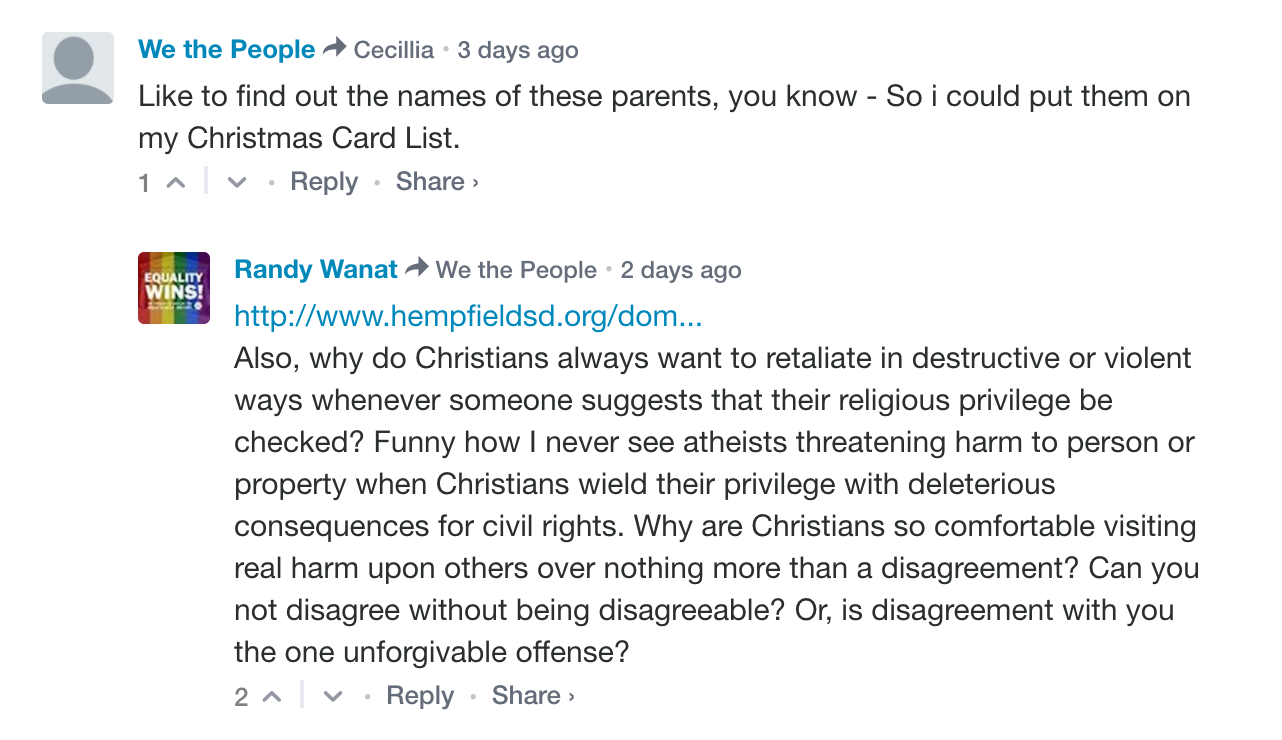 [Hemant’s note: Randy, seen responding to one of the people above, is a frequent commenter on this site.]

I feel the need to point out here, by the way, that the picture Breitbart used to illustrate Katherine Rodriguez‘s article about this crime against Christmas was a picture of a Nativity play rather than one from “A Christmas Carol.” Maybe they were trying to avoid the reality that most of their commenters would happily elect pre-ghost-visitation Scrooge as President given the chance.

Anyway, the family who had merely asked for their kid to not participate in the play now say their child is being harassed at school. They have since left their home and their town for their own safety.

“There’s no way we’re going to take a chance after the pizza incident,” they said, referring to the incident where a man armed with an AR-15 entered a Washington, D.C. pizzeria and fired one or more shots in an alleged attempt to “self-investigate” a bogus online conspiracy theory about Democratic political operatives running a child sex ring out of the building.

The armed man in that incident, Edgar M. Welch, is responsible for his own actions, just as anyone who goes after this family would be responsible for theirs — but manipulating emotionally volatile people into believing things that aren’t true for the sake of whipping them up into a frothy rage is an unconscionable act all its own. The conservatives spreading these lies are putting people’s actual lives in danger in order to advance the false narrative that Christians are being persecuted in this country.

The couple now has to worry about some nut reading these completely fabricated stories and harming them or their child because of it. Because, apparently, the true spirit of Christmas is all about making sure a Jewish family doesn’t feel welcome in your neighborhood, country, or inn.

(Screenshot of Tiny Tim via YouTube. Thanks to Chris for the link)

December 22, 2016
Catholic Writer: Placing a Satanic Display Near a Nativity Scene is a "Form of Vandalism"
Next Post