Vandals Destroyed the Satanic Display in Florida By Chaining It To a Vehicle and Pulling It Down December 20, 2016 Hemant Mehta

The people of Boca Raton, Florida can’t seem to handle the atheist and Satanist displays in Sanborn Square park.

Last we heard, Preston Smith‘s Pentagram display — having already gone through hell and back with the atheist banner — was back up and locked in place. 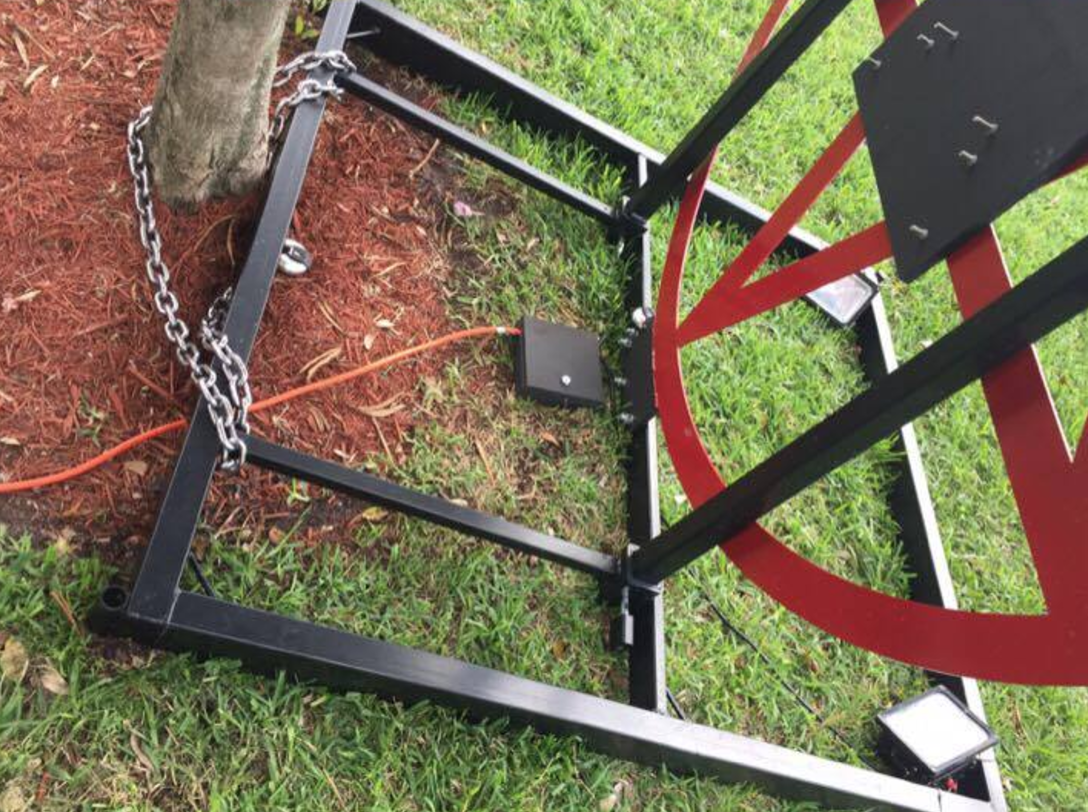 This morning, however, vandals still found a new way to take it down.

Boca Raton police officer Sandra Boonenberg said the vandals struck early Tuesday. They tied a chain from a vehicle to the 300-pound sculpture and pulled it down, cracking its frame. Tire marks leading from the Satanic sculpture remained clearly visible later in the day.

This is what Jesus commanded, I guess…?

Where are the Christians willing to defend this display? Where are the ones speaking up for the rights of people they don’t agree with? They don’t have to like the Pentagram, but the only reason it’s there is because there’s a giant Nativity scene in the same park. And if anything happened to it, you bet your ass atheists would be speaking out against the vandalism.

Instead, when pastors show up, it’s to denounce the displays as if Christians own the month of December. It’s not enough to simply say the vandalism is wrong.

Last week, a group of pastors gathered at the park to discuss, in their opinions, the pentagram’s offensive nature, as it has been displayed next to a Nativity scene at the park. They peacefully marched and demonstrated against what they said “is a sign of evil.”

“There’s a lot of issues here,” said Joseph Kabbas, who said he stands with that group. He does not condone the damage but did not like seeing the display here.

“This is an issue to be inflammatory,” explained Kabbas. “If he would have put this up in February or March, he wouldn’t have gotten the same reaction from everybody.”

Bullshit. Satanists and atheists didn’t put up those displays to piss off Christians. They did it to show people everyone has access to public space; if there’s a Nativity scene in the park, then there’s nothing wrong with other groups asking for the same right.

And we all know damn well that if this display went up in February or March, conservative Christians would have been just as furious about it. They don’t suddenly calm down and read the Constitution in January.

No word yet on who did the damage. Attempts to reach Smith for immediate comment were unsuccessful.

Lucien Greaves, the spokesperson for The Satanic Temple, issued this statement:

Theocrats continue to mindlessly assault the very meaning of Religious Liberty while presuming to uphold it. In their thoughtlessness, they scream for a government that will act as arbiter of what is and is not an appropriate religious opinion. The resistance to the Satanic display in Boca Raton validates the need for its presence to demonstrate to the local populace that we live in pluralistic society with protections for religious liberty and free speech.

December 20, 2016
A Middle School Teacher is Bribing Students With Doughnuts to Attend a Bible Study She Runs
Next Post