Bill Maher Pushes Back on Donald Trump’s Supposed Atheism: “His God Is Him” December 20, 2016 Hemant Mehta

Bill Maher Pushes Back on Donald Trump’s Supposed Atheism: “His God Is Him”

In an interview with ATTN:, Bill Maher was asked if he believed, as some have claimed, that Donald Trump is an atheist.

Maher didn’t give a straight answer, saying instead that Trump doesn’t even think about deep philosophical issues like that. 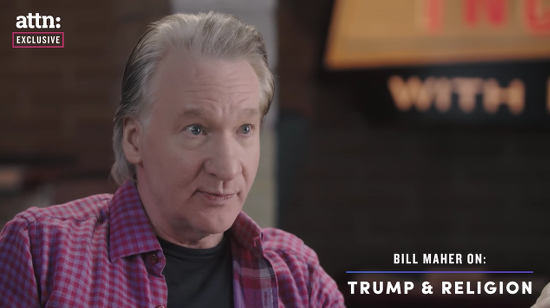 Donald Trump is his own God. Let’s be real about that. His God is him. I mean, you can’t really be a person of faith if you think you are the most important person in the universe.

It’s a thought I’ve echoed on this site, too. Saying Trump is an atheist is like saying a baby is an atheist. It might technically be true, but it lacks any significance because the person hasn’t put any thought into it.

I find it sad, too, that we’re even having this conversation at all. It presumes that our next President is a liar.

For all his talk on the campaign trail about being a proud Christian, and for all the conservative Christians he’s surrounding himself with, it’s very clear that no one on the other side of the aisle really buys into the act. It’s all for show. And as usual, the Religious Right is all too eager to accept the lies if it advances their agenda.

I wish Trump were a critical thinker, including on matters of religion, but he’s shown repeatedly that he’s incapable of introspection. If he’s an atheist, he’s one who plans to let the Religious Right pull his puppet strings whenever Putin gets tired.

December 20, 2016
Adam Ruins Everything Explains the Pagan Origins of Christmas
Next Post