Former House Majority Leader Tom DeLay told WorldNetDaily recently that Donald Trump‘s victory signaled a chance for Christian conservatives to basically do whatever the hell they want over the next few years. 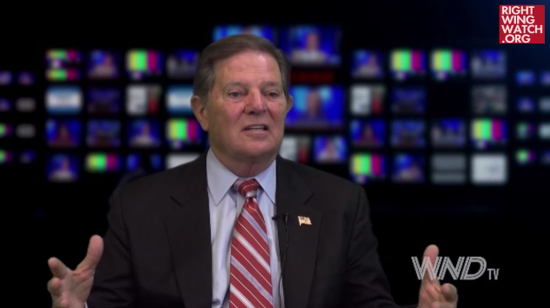 “Now that Trump is elected, I’m very excited about it because I see now what God is doing,” DeLay said. “First of all, He stopped the left in its tracks and He stopped Hillary Clinton and put a man in place that was a strong leader, which the country was begging for.”

There’s a little bit of everything in that, isn’t there?

God sent a bold message… even though Trump lost the popular vote.

Donald Trump is a “clean slate”… even though his ignorance, bigotry, and sexism have never been hidden from the public.

God prevented a woman from winning the presidency… because we can’t let that happen, can we?

God saw to it that Republicans would rewrite laws as they see fit — which, based on what GOP leaders have said they’ll do, means God wants to see minorities further persecuted and poor people loss access to health insurance.

If DeLay thinks Republicans have a God-given mandate, so be it. But God and the GOP have to take the blame, then, for every embarrassing thing Trump does and for all the consequences of their actions. When the economy starts tanking again and unemployment goes back up, remember that it’s all God’s fault. Tom DeLay said so.

December 19, 2016
These Are the Reasons People Have Challenged God's Existence Over Several Centuries
Next Post

December 19, 2016 UK Charity Commission: Jediism Is Not A Real Religion
Browse Our Archives
What Are Your Thoughts?leave a comment