College students who voted for Donald Trump are now requesting “safe spaces,” according to the New York Times. 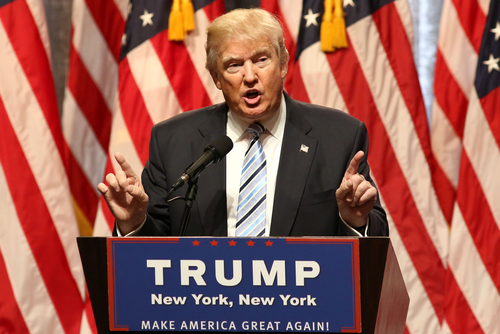 Amanda Deletka, a sophomore at the University of Michigan, was “ecstatic” was Trump won the election, but her celebratory mood was dampened when she realized that, for most of her campus, Trump’s win was a cause for mourning instead:

“Nobody has died,” Ms. Delekta said. “The United States has not died. Democracy is more alive than ever. Simply put, the American people voted and Trump won.”

Conservative students who voted for Mr. Trump say that even though their candidate won, their views are not respected. Some are adopting the language of the left, saying they need a “safe space” to express their opinions — a twist resented by left-leaning protesters.

Administrators are struggling to maintain a balance between political factions. But some college presidents have entered the fray with statements that seem more sympathetic to the left, in some cases provoking a backlash.

It should go without saying that this is one extremely unusual election, and the devastation from the Left is not because a Republican candidate won. Trump has demonstrated his utter incompetence and complete lack of respect for the Constitution since the beginning of his campaign, and Americans of all political stripes have every reason to be concerned, if not terrified.

No one deserves harassment. That said, it’s still ironic that Deletka, and others like her, now want safe spaces to express their opinions: the very thing that exemplifies the emotional “weakness” of the Left, according to many right-wingers. It doesn’t work that way. The reason Deletka feels “unsafe” is because she voted for a candidate who selected neo-Nazis for his cabinet; who bragged about sexual assault, telling survivors everywhere that powerful men don’t face consequences for their actions, but rather get rewarded in spite of them. This “unsafe” feeling she has is what happens when people realize that these values have no place in a civilized society, and rightly speak out against them.

The article does not mention Delekta’s religious views (or lack thereof), but I imagine that the Jesus who preached “love your neighbor as yourself” would have wept at her decision and that of the 81% of evangelicals who followed her lead.

December 17, 2016
South Carolina Republicans Have Filed a Bill Allowing Teachers to Proselytize in Class
Next Post

December 17, 2016 Serena Williams Told Women to Dream Big, But Her Jehovah's Witness Faith Often Holds Them Back
Browse Our Archives
What Are Your Thoughts?leave a comment