An Excellent Takedown of the Argument That Atheists Have No Morals December 17, 2016 Hemant Mehta

An Excellent Takedown of the Argument That Atheists Have No Morals

A lot of religious people like to argue that atheists can’t be moral because they have no objective standard for morality.

The YouTuber at Counter Arguments does a wonderful job explaining why that argument doesn’t make any sense. 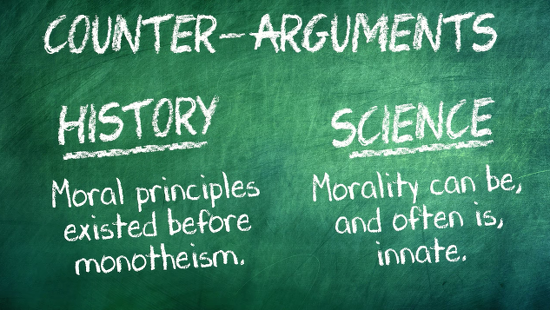 The response boils down to two points: Moral principles existed long before monotheism and parts of our brain can be stimulated to create empathy (suggesting it’s not God-given).

I would add that the people who claim God gives them morality often fail to recognize just how many people have done immoral things in their God’s name.

December 17, 2016
Serena Williams Told Women to Dream Big, But Her Jehovah's Witness Faith Often Holds Them Back
Next Post