Sean Hannity is Producing a Film Starring Kevin Sorbo as an Atheist Who Converts to Christianity December 15, 2016 Hemant Mehta

You remember God’s Not Dead, the grossly stereotypical Christian film in which Kevin Sorbo played an atheist professor who eventually found God.

Well, Sean Hannity is essentially remaking it. The Fox News host will serve as executive producer for Let There Be Light, a film scheduled to premiere this time next year, all about an atheist who converts to Christianity after a near-death experience. Because that happens all the time. 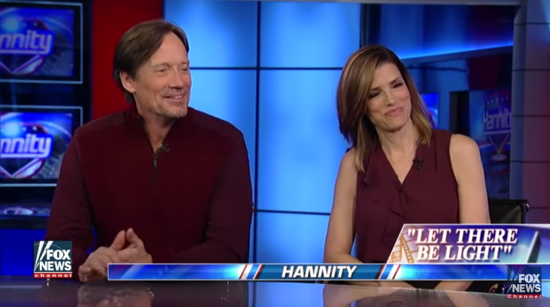 “It’s been likened to Ghost meets Heaven Is for Real, with a dash of God’s Not Dead,” Sorbo said of the film, which was made on a $3 million production budget. Sorbo is still working on a distribution deal but he expects the film to open in November 2017.

“Heaven is for Real mixed with God’s Not Dead? I CAN’T WAIT!” said nobody.

Oh, who am I kidding. Conservatives will eat it up. They love it when people toss aside logic and reason in favor of visions that appear only in their dreams.

December 15, 2016
In Honor of Christopher Hitchens, Five Years After His Death
Next Post