The Freedom From Religion Foundation is placing a full-page ad in tomorrow’s New York Times honoring Bill of Rights Day. And if we’ve ever needed to worry about those rights being violated, it’s with the incoming Donald Trump administration. 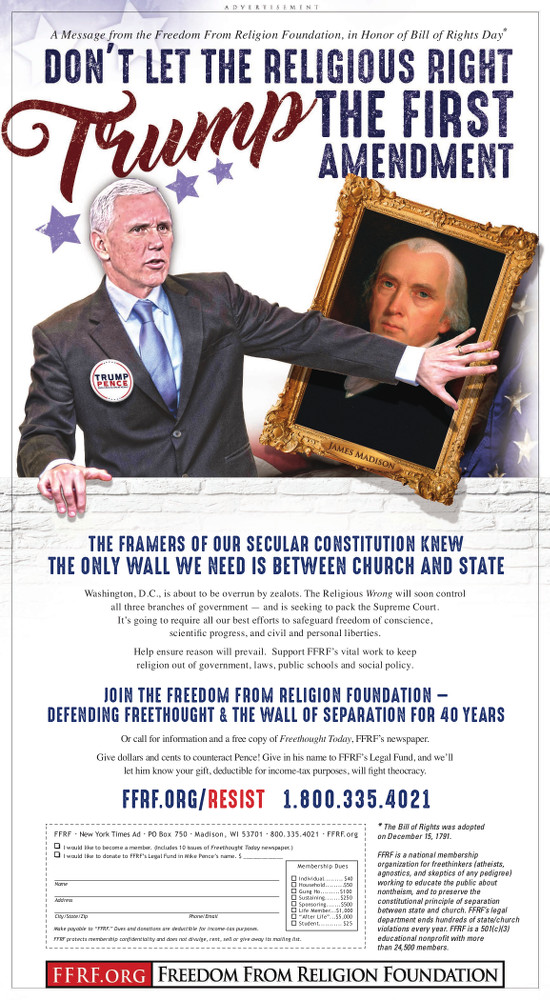 The advertisement features a prominent image of Vice President-elect Mike Pence pushing aside a portrait of James Madison and warns: “The framers of our secular Constitution knew the only wall we need is between church and state”…

The ad, which you can see in full here, also urges readers to join FFRF to help defend that separation.

Full page ads in the Times are said to run for at least $150,000. In the past, FFRF has acknowledged in the press release whenever donors footed the bill for such a placement, though they didn’t do that here. They did, however, say they hope the ad performs “a public service” and increases their membership. (Edit: FFRF tells me the $150,000 number is way off base, and they would never pay such a price for an ad. They received a special rate offered to non-profits. The actual amount, however, was not made public.)

December 13, 2016
Bill O'Reilly Says the War on Christmas is Finally Over: "We Won."
Next Post

December 14, 2016 Atheist Activist Rob Sherman Was Often Abrasive, But He Knew How to Defend Church/State Separation
Browse Our Archives
What Are Your Thoughts?leave a comment