Report: U.S. Christians Are Less (Formally) Educated Than Other Religious and Non-Religious Groups

A new report released by the Pew Research Center, using data from 2010, finds that Christians in the U.S. have far less formal education than non-religious people and religious minorities. 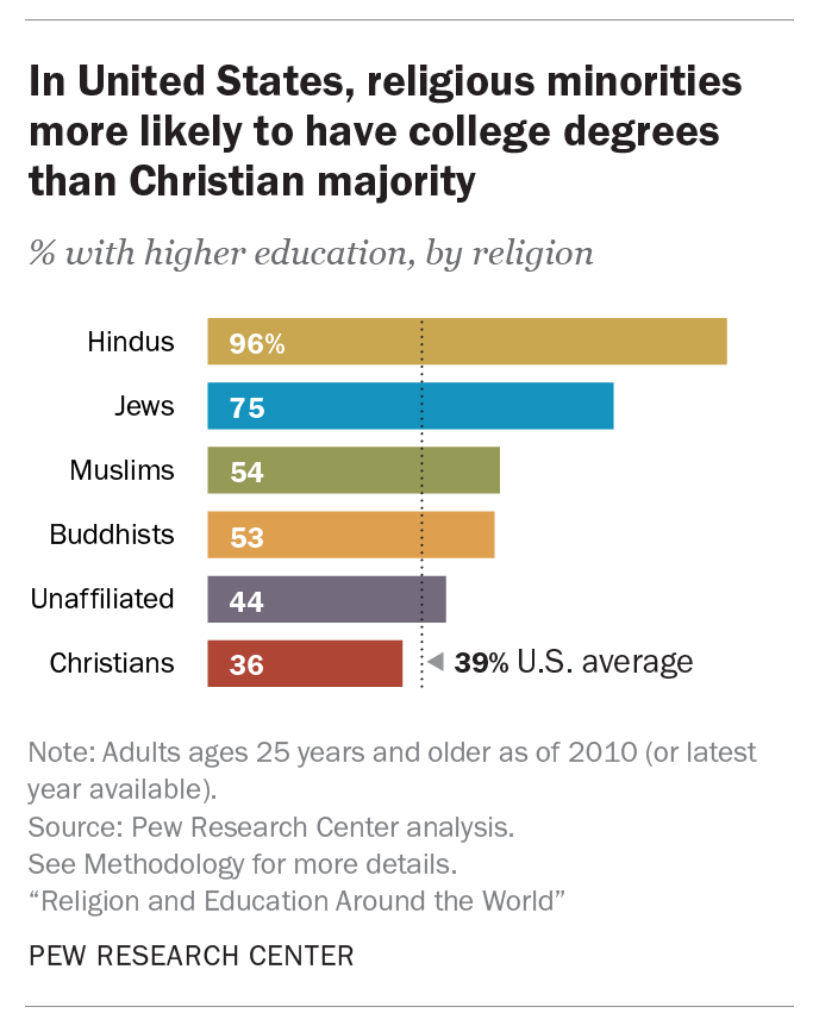 Before you put your smug face on, keep in mind the caveats:

We’re talking only about years of formal schooling, and plenty of people would tell you that’s not the only kind of education that matters.

The Unaffiliated camp isn’t far behind. While 36% of U.S. Christians have a post-secondary degree, only 44% of Nones do. (Compare those numbers to the 96% of U.S. Hindus with college degrees.)

This is one of those times where it’s really frustrating to have atheists lumped in with Agnostics, people who are wishy-washy about their belief in a Higher Power, and believers who claim no specific religious label. My suspicion is that the percentage of atheists with a college degree is remarkably high — there’s just not enough data to separate us from the pack.

In fact, the report even says this in a sidebar:

Although data on the educational attainment of self-described atheists, who make up one category of religious “nones” (along with agnostics and people who describe their religion as “nothing in particular”), was not available for most countries in this report, analysis of survey data collected by Pew Research Center finds that atheists in the United States and France are significantly more likely than adults who say their religion is “nothing in particular” to have postsecondary degrees.

The study also found a connection between education levels and the number of people who described themselves as having no religious faith, [Conrad] Hackett said. In the United States, the religious tended to be less educated than the nonreligious, he said.

None of this should be surprising to anyone who’s looked into the data before.

It would be wrong, however, to suggest this means atheists are smarter than Christians. It’s far more accurate to say we’re generally in school for a longer period of time — and if you get a college or graduate school degree, there’s a better chance you’ve been exposed to different ideas, been challenged about your own views, and come to the realization that no single religious group has a monopoly on the truth.

Worldwide, by the way, the numbers are very different. Just look at the average number of years people spend in school. Jews crush everyone. 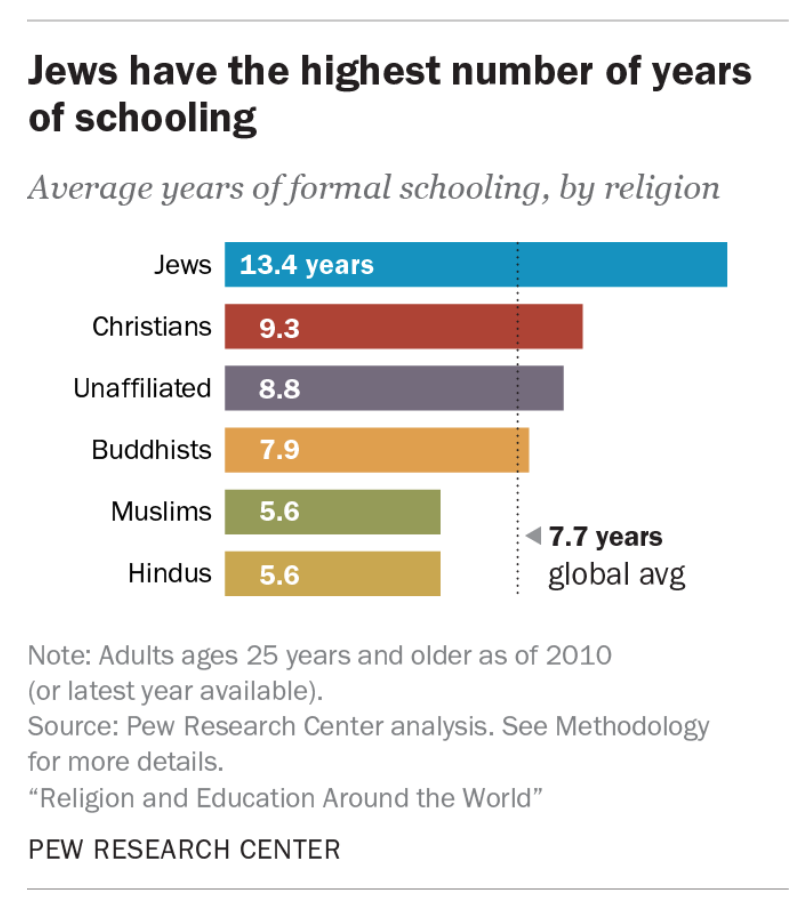 Hindus, the majority of whom are in India, receive far less education on average compared to the subset who live in the U.S. And Christians worldwide get relatively more schooling compared to the global average. (Globally, Christians have 9.3 years of schooling, far more than the average of 7.7 years; in the U.S., they receive 12.7 years of schooling, less than the 12.9 years national average.) Perhaps that’s not surprising given the anti-science, anti-reason strain of Jesus followers who have spread across the U.S. That group of Christians sees formal education as the enemy, a way to indoctrinate people into the liberal, atheistic mindset. They’re wrong, but it’s not like that’s ever stopped them before.

You can play around with the specific numbers right here.

(Edit: I clarified a passage about how much education Christians receive globally compared to the U.S. While they receive more years of schooling in the U.S. than they do globally, they’re below average in the U.S. and above average globally. Sorry for the confusion.)

December 13, 2016
Christian Right Activist: When I Speak in Tongues, I'm Telling God I Want to Work With Donald Trump
Next Post

December 13, 2016 Satanists Say Ohio's Anti-Abortion "Heartbeat Bill" Violates Their Religious Freedom
Browse Our Archives
What Are Your Thoughts?leave a comment