Bill O’Reilly Says the War on Christmas is Finally Over: “We Won.” December 13, 2016 Hemant Mehta

Bill O’Reilly Says the War on Christmas is Finally Over: “We Won.”

Bill O’Reilly, who arguably did more than anyone else to perpetuate the lie that Secular Americans were waging a “War on Christmas,” said tonight that the war was effectively over. 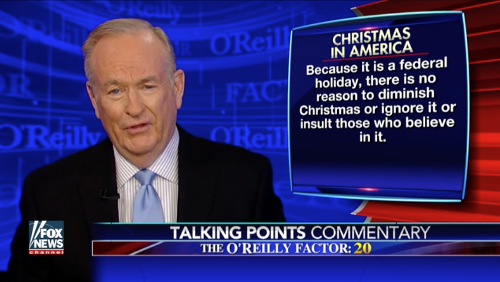 You may remember, about 10 years ago, The Factor began spotlighting companies that refused to say the words “Merry Christmas.”

In fact, some of those businesses actually ordered their employees not to say it.

Well that culture war issue ignited, and we won. Most companies stopped the nonsense and Merry Christmas became a common greeting once again.

There is no war. There never was one. What O’Reilly was really against was acknowledging the existence of non-Christians in our society.

Saying “Merry Christmas” means little to people who don’t celebrate it, while “Happy Holidays” is a far more inclusive phrase. That’s why some businesses encouraged the latter. No manager ever asked employees to say, “Christmas is a joke since Jesus is a myth.” Instead, they opted for words that celebrated Christmas… along with everything else.

That lack of exclusivity is what O’Reilly was so upset about. He whined for a decade, from his Fox News-created safe space, because Christians were treated like everyone else instead of special little snowflakes.

Just to be clear, no atheists ever screamed bloody murder because an employee said “Merry Christmas” to them. But a hell of a lot of Christians freaked out over someone saying “Happy Holidays.”

But with the election of President Everyone Will Say “Merry Christmas” Again, I guess all is well again.

Since the war has basically been won, this is a clean up operation — but the information is valid.

Many Americans celebrate Christmas because they believe that Jesus is the savior and his birth should be honored.

And because it is a federal holiday, there is no reason to diminish Christmas or insult those who believe in it.

If the war is over, does that mean O’Reilly will stop talking about it? I doubt it.

Did you also catch the bait-and-switch? There are absolutely a lot of Americans who celebrate Christmas. No one, however, ever diminished or insulted believers because of it. Saying “Happy Holidays” isn’t anti-Christian.

To paraphrase a popular tweet, O’Reilly’s viewers are the same people who scream “All lives matter” whenever they hear “Black lives matter,” while insisting they’re not racist. By that logic, they should be leading the charge to say “Happy Holidays.”

December 13, 2016
A Glimpse Into the Jehovah's Witnesses' Disturbing Secrets
Next Post 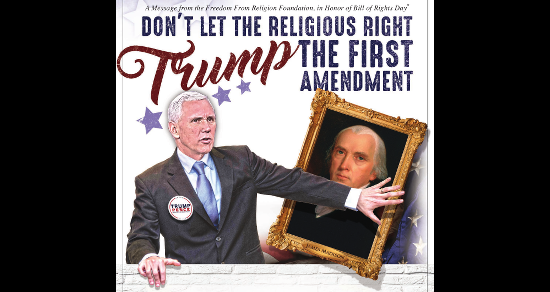 December 14, 2016 Atheist Group's Ad in New York Times: "Don't Let the Religious Right Trump the First Amendment"
Browse Our Archives
What Are Your Thoughts?leave a comment