An Atheist Whose Dying Religious Sister Condemned Her Has a Follow-Up On Her Story December 12, 2016 Hemant Mehta

Last week, I posted about Dana, a woman who called in to The Atheist Experience talk show. She had become an atheist after growing up in a very religious household, and her dying sister had just confronted her about it, telling Dana, “I want you to know you’re going to Hell, and I don’t want to go to Heaven without you, and you better get right with God.”

Dana was devastated. She wanted to respond, but she also didn’t want to start a fight with her sister in her final days. (You can watch a clip of that conversation here.)

On yesterday’s episode of the show, Dana called back with a disturbing follow-up: Her family had basically cut her out of their lives. The clip begins at the 1:35:25 mark. 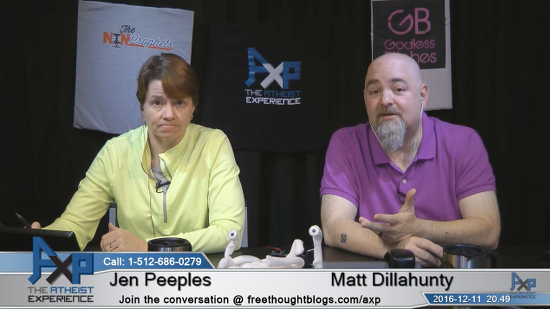 At one point, Dana said very honestly, “I know this is the last thing she can do to me, but, oh man, they kick below the belt…” It’s heartbreaking to hear a family act like this, putting religious dogma over love.

Matt Dillahunty and Jen Peeples told Dana that she had done nothing wrong, and that her family members aren’t even good Christians by their own standards. They’re right on both counts.

December 12, 2016
Indiana Man Sues City of Knightstown for Putting a Christian Cross on Top of Town Square Tree
Next Post