A Christian Nurse in England Deserved to Be Fired for Preaching to Her Patients December 12, 2016 Hemant Mehta

If you believe Sarah Kuteh‘s story, then you probably think she was fired for sharing her Christian faith with the patients in her care while working as a nurse at an NHS hospital in England.

And if you believe the people who fired her… she’s right. 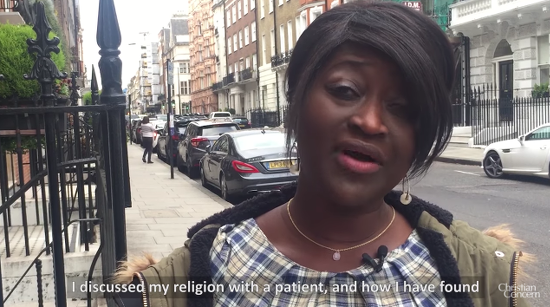 Kuteh spent most of the past 15 years as a nurse assessing patients before they went in for surgery. It’s a time when the patients are scared and vulnerable, and Kuteh enjoyed being in a position where she could calm their nerves during a very stressful time in their lives. Part of the standard questionnaire she used inquired about a patient’s faith.

She says in that video that the discussion “would always bring about, most of the time, from the patient, about what religion they are. I discussed my religion with a patient, and how I have found Jesus Christ, and how much peace I have. Especially when patients come to me feeling really, really devastated sometimes…”

Maybe you can see the problem. It’s not like the patients said they were Christian, and Kuteh said, “Me, too!” and they had a conversation about how their shared faith brought them joy. Rather, regardless of their beliefs, Kuteh used the opportunity to proselytize.

The patients didn’t always appreciate it. Kuteh’s boss found out and told her she couldn’t promote her religion unless the patients brought it up or asked for it. Kuteh took that as permission to preach if patients merely said they were comfortable with talking about religion.

I’m personally comfortable talking about religion. It doesn’t mean I want a nurse telling me how awesome Jesus is. And what about Muslims, Jews, Hindus, and other non-Christian patients?

No wonder Kuteh was later fired.

Mrs Kuteh was sacked in August after an investigation followed three further complaints in June.

The nurse was told one patient complained she had given her a Bible she did not want and had said she would pray for her. And another accused the nurse of “preaching” at her.

There are undoubtedly patients who appreciated Kuteh’s promotion of Christianity, and no one’s suggesting she was a bad nurse in any other way. But the video in which she explains her situation ends with a statement that is really self-incriminating: “How could telling anyone about Jesus Christ really be harmful to any patient?”

Here’s a thought: It’s harmful for the same reason that Christian patients wouldn’t want to hear about the Truth of Allah from a Muslim nurse — or why God isn’t real from Nurse Hitchens — during the most stressful time in their life.

Kuteh received a warning, and she ignored it. That’s why she was fired. And it was the right decision. It’s not Christian persecution. It’s a Christian who wouldn’t follow the rules and was rightly punished because of it.

December 12, 2016
In a Belgian Film, God's Daughter Gets Back At Him By Telling the Whole World Their Deathdates
Next Post