More than 60 people are reportedly dead after the roof of a church collapsed last night in Uyo, a city in southern Nigeria. Hundreds of people were inside Reigners Bible Church to attend a bishop’s ordination when the disaster occurred. 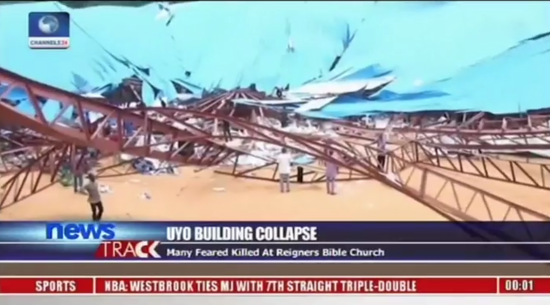 Bodies of at least 60 victims have been retrieved but the toll could mount as a crane removes debris, according to a rescue official who spoke on condition of anonymity because he is not authorized to speak to reporters.

The governor’s spokesman, Ekerete Udoh, said the state government will hold an inquiry to investigate if anyone compromised building standards. Buildings collapse regularly in Nigeria because of endemic corruption with contractors using sub-standard materials and bribing inspectors to ignore shoddy work or a lack of building permits.

There’s bound to be people mocking the irony of the situation. Those people are cruel to make light of the tragedy. I am curious, however, how religious people will rationalize this awful situation with their belief that a good God has a plan for everyone’s life. The people in that church were trying their best to please God… and they were killed as a result.

The blame lies with the architects, the material, and other things that were in our control. There was nothing supernatural about what happened. And until the Christians in Nigeria acknowledge that, I fear this won’t be the last time they experience a tragedy like this.