A forthcoming documentary offers an inside look at Ark Encounter, the Noah’s Ark theme park, and what it says about “America’s troubled relationship with science.” It’s called We Believe In Dinosaurs: 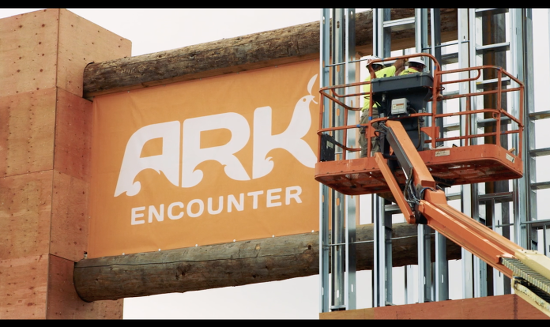 The film focuses on three people: an artist named Doug Henderson, who creates the dinosaurs and the other elaborate exhibits in the Ark that attempt to explain how a literal interpretation of the Bible’s story of creation is scientifically plausible; David MacMillan, a former creationist who no longer believes in those explanations; and Dan Phelps, president of the Kentucky Paleontological Society, who has been an ardent critic of Ark Encounter, its sister Creation Museum, and the public tax dollars that have helped support them. (Phelps is fond of calling Ham the “Ayatollah of Appalachia.”)

The filmmakers, Clayton Brown and Monica Ross, are currently crowdsourcing funding for the post-production stage of the film.

They say the film accurately reflects the Creationists’ perspective. It’s not about mocking them; it’s about understanding them. But we all know how sensitive Creationists get the moment you pit their beliefs against those of real scientists, so Ken Ham is also sowing doubts about the filmmakers’ motives:

“The filmmakers’ recent public comments have revealed that they were not telling the truth when they insisted that AiG would be portrayed in a fair and accurate manner,” Ham said. “Therefore we don’t expect their finished film to feature the straightforward reporting on the Ark and Creation Museum that we were assured we would receive. It looks like their film will be more of a mock-umentary than a documentary.”

I’m going to predict that if Creationists end up looking foolish in this film, it’ll be because they were quoted verbatim. They don’t need us to mock them; they do a fine job of it themselves.

As of this writing, the film has raised about $30,000 of the $50,000 the filmmakers are looking for. If the Ark can raise close to $100 million, surely a film about the travesty can earn a fraction of that.

December 10, 2016
One Atheist's Clever Message for the Salvation Army
Next Post

December 10, 2016 A Former Pastor Explains How the Typical Christian Response to Evil Led Him Away From the Faith
Browse Our Archives
What Are Your Thoughts?leave a comment