God Did Not Send a Storm to Prevent ISIS from Entering Israel December 10, 2016 Hemant Mehta

We finally know how God plans to stop ISIS. He’s sending clouds of dust and rain to block their entry into different regions. 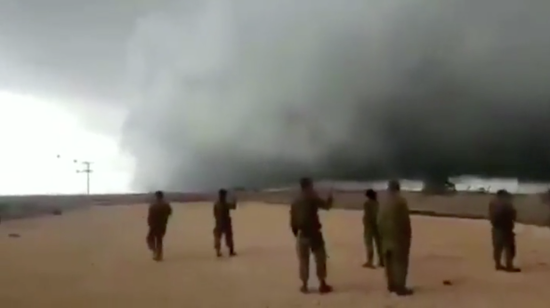 A weather phenomenon occurred at 8am Thursday on the other side of the Syrian border, in the same place where ISIS attacked Israel.

This strange storm of what appears to be dust, cloud and rain did NOT cross the border fence into Israel. It sat like a barrier between ISIS and Israel.

According to several commenters, the storm did not just sit there. It moved into Israel and there was plenty of rain in the region. It’s also a common phenomenon and had nothing to do with ISIS. But most of those facts were successfully buried under a sea of comments from gullible believers.

These exchanges give you an idea of what sensible people were trying to say:

Another, more prosaic, visitor to the Facebook page added, “It’s simply a weather phenomenon,” to which Israel News Online responded: “Yes it is of course. Now do we ask who controls the weather? Whatever the cause it sat between ISIS and Israel and did not enter Israel.”

And Eric Crane wrote: “It’s a long shelf cloud. Nothing more. Saw it more times than I can count while living in Kansas. Why some of you idiots stretch things for more than they are is the unbelievable. It’s either race, gender, politics, religion, and now you can add weather to the list.”

While God was supposedly creating that storm, by the way, He was sending wildfires to burn down large swaths of East Tennessee. Thanks a lot, Jesus…

December 10, 2016
A Former Pastor Explains How the Typical Christian Response to Evil Led Him Away From the Faith
Next Post

December 10, 2016 Longtime Atheist Activist Rob Sherman Has Died in a Plane Crash
Browse Our Archives
What Are Your Thoughts?leave a comment