Paxton minced no words in describing what happened in that hallway at Patterson Middle School.

“This is an attack on religious liberty and a violation of the First Amendment and state law,” he said. “I am calling on the school board of the Killeen ISD to immediately reverse their unlawful decision.”

Starnes adds that the school board typically breaks the law to promote Christianity — and makes trans kids feel unwelcome, too.

Terry Delano, president of the school district’s board of trustees, told me they voted to change the name of “Winter Break” to “Christmas Break.” And last year they defied the Freedom From Religion Foundation’s demand to cease praying before meetings.

The school district also ignored the Department of Education’s demand that they open all bathrooms to the opposite gender.

Fox News propagandist Todd Starnes‘ latest headline claims that a Texas school censored a poster featuring a scene from “A Charlie Brown Christmas,” arguing that this is political correctness run amok. As usual, the facts don’t back him up. 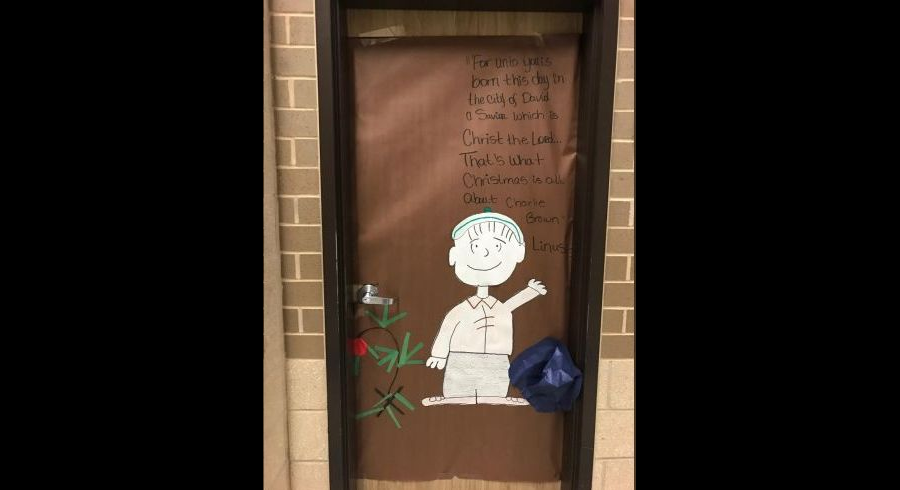 The poster in question quotes Linus saying, “For unto you is born this day in the city of David a savior which is Christ the Lord. That’s what Christmas is all about, Charlie Brown.”

There’s no difference between that and posting straight-up Bible verses on the walls. So the question is really: Should a public school allow teachers to proselytize to students? This poster wouldn’t be allowed without Linus on it, and his presence doesn’t change anything.

Is Todd Starnes okay with Muslim teachers promoting verses from the Qur’an praising Muhammad? How about atheist teachers quoting Richard Dawkins and reminding students that we’re all part of a godless existence?

Of course not. Just because this Bible story is wrapped in the context of a Peanuts cartoon doesn’t make it any more legal.

But try telling that to Starnes or Dedra Shannon, the staffer from Patterson Middle School in Killeen (Texas) whose poster was later removed:

… On December 7, Ms. Shannon was confronted by the school’s principal.

“She said, ‘please don’t hate me, but unfortunately you’re going to have to take your poster down,” Ms. Shannon said. “I’m disappointed. It is a slap in the face of Christianity.”

The principal went on to explain that the poster violated the U.S. Constitution.

“She said my poster is an issue of separation of church and state,” Ms. Shannon told me. “She said the poster had to come down because it might offend kids from other religions or those who do not have a religion.”

This isn’t merely about offending someone. This is about making sure our public schools aren’t churches in disguise. There’s a difference between acknowledging the basic beliefs of Christians and promoting the birth of Christ as if it’s a part of history that everyone accepts.

Taking the poster down isn’t a “slap in the face of Christianity,” either. How good must Shannon have it that she sees following the same rules as everyone else an attack on her faith? The rest of us have no problem obeying the law. She just wants special dispensation to push her religious views on everyone else.

This wouldn’t be allowed for any other religion — or atheism — and that’s why it’s not okay when Christians do it.

The promotion of Christianity in “A Charlie Brown Christmas” is also the same reason public schools shouldn’t be performing it as a play. Go enjoy the cartoon with your family or in your church. Public schools, however, have plenty of secular alternatives they can use.

December 9, 2016 Prince, a Devout Jehovah's Witness, Once Asked if President Obama Could "Outlaw Birthdays"
Browse Our Archives
What Are Your Thoughts?leave a comment