Right-wing propaganda website Breitbart recently posted an article downplaying the effects of global warming by saying the temperature had cooled down following an El Nino, so there. It’s the same kind of warped thinking that led Sen. James Inhofe (R-OK) to argue that a snowball’s existence disproved climate change.

Those lies are typical in conservative bubbles where science and facts are considered part of the liberal agenda and Donald Trump will save the world from micro-aggressions, but Breitbart inadvertently included a video from the Weather Channel in that article, suggesting that the meteorologists there were supporting their spin. They later said the video was “provided by and placed by a third party video vendor” and not embedded on purpose by the article’s writer. It’s no longer visible on their site.

That didn’t matter to meteorologist and scientist Kait Parker, who was featured in that video. Yesterday, during a segment on the Weather Channel, she explained everything the Breitbart piece got wrong, and it was glorious. 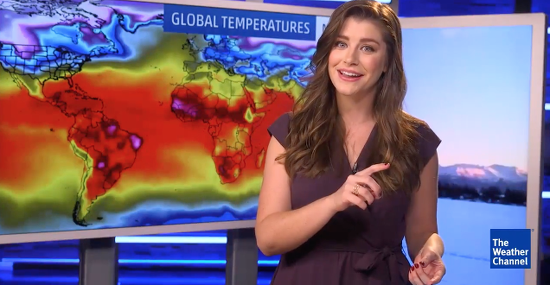 (The YouTube video’s description was even more blunt: “Note to Breitbart: Earth is not cooling, climate change Is real and please stop using our video to mislead Americans.”)

Parker began and ended her monologue with a note to her critics:

… Here’s the thing. Science doesn’t care about your opinion! Cherry picking and twisting the facts will not change the future, nor the fact — note, fact, not opinion — that the Earth is warming.

So next time you’re thinking about publishing a cherry picked article, try consulting a scientist first.

And to all my fellow scientists out there, let’s make the facts louder than the opinions.

If we begin the slow clap now, maybe we can influence the weather on the other side of the world.

December 7, 2016
Ghanaian Bishop Says He Has the Power to Make Your Penis Larger If You'll Just Let Him Touch It
Next Post

December 7, 2016 German Would Be Making a Huge Mistake By Instituting a Ban on Full-Face Veils for Muslim Women
Browse Our Archives
What Are Your Thoughts?leave a comment