Christian Pastors Met Up With Congress Members to Drive Satan Out of the “Halls of Legislation” December 6, 2016 Hemant Mehta

The thought of Religious Right leaders meeting with members of Congress, while legal, is extremely discouraging because it suggests a level of Christian influence in our politics. That’s why, when I hear about a “Congressional-Clergy Town Hall” sponsored by pseudo-historian David Barton‘s Wallbuilders and the Jefferson Gathering prayer group, my first concern was what policy issues they discussed.

That was the wrong fear, apparently. Because the pictures emerging from that gathering are freaky enough on their own. Adults in power seriously think prostrating themselves in front of God will help guide this nation to glory. 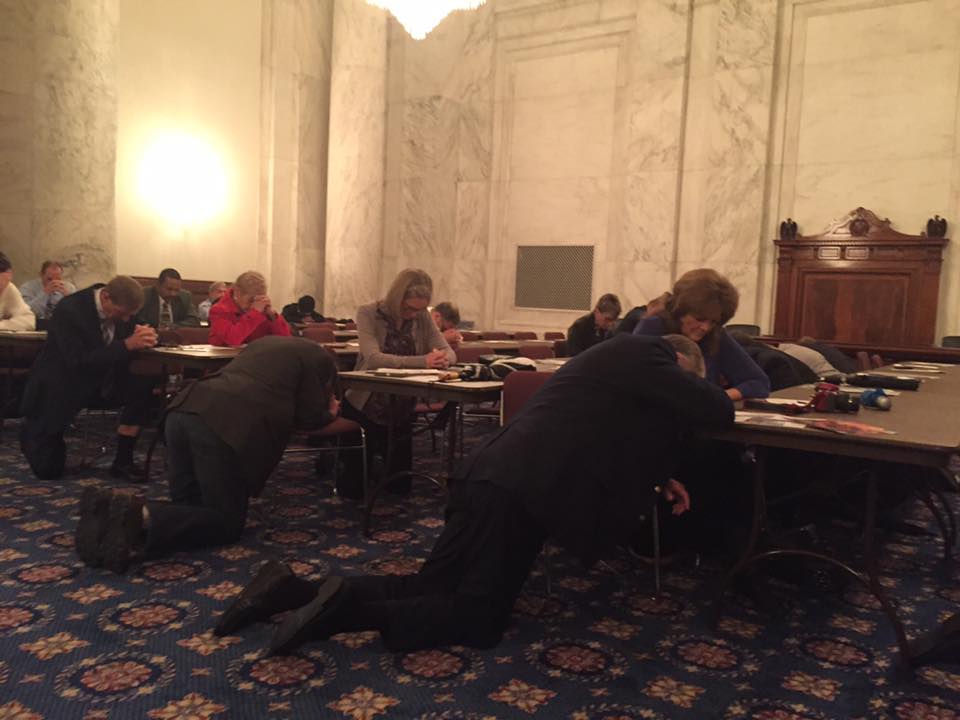 Right Wing Watch’s Kyle Mantyla has more on what happened:

[North Carolina Pastors Network’s Dave] Kistler also revealed that in addition to praying in the Kennedy Caucus Room in the Capitol, pastors were given access to the U.S. Senate chamber by Rep. Louie Gohmert. In the senate chamber, he said, “we got on our knees … and it sounded almost like a labor room as people were crying out to God for the revival that Chaplain [Barry] Black believes is coming and that we believe is coming.”

“To do that in the Senate chamber was an absolutely astounding opportunity,” Kistler said, “and again it puts an exclamation point on the Senate chaplain’s assessment that revival is on the way and may indeed begin in the halls of Congress.”

The people who have this sort of direct access to power are the same people who think they’re being persecuted. Meanwhile, those of us with no cozy access to Congress are trashed every time we demand the government remain neutral on religious matters.

December 6, 2016
This Fake News Article Went Viral, Despite All the Obvious Clues Proving It Was a Hoax
Next Post