A Dying Atheist Tells a Heartbreaking Story About Being Condemned By Her Religious Sister December 5, 2016 Hemant Mehta

I don’t think religious people always understand the difficulties of being an atheist in certain families, in certain parts of the country. But the isolation some atheists feel is very real and it can have a drastic impact on their lives.

During yesterday’s taping of The Atheist Experience — a Texas-based call-in, public access talk show about atheism — a caller named Dana told a heartbreaking story about how she became an atheist after growing up in a very religious household, and how that secret was finally discovered at the worst possible time. It begins at the 1:14:14 mark. (Update: I posted an unedited version of the video earlier. The timestamp now fits with the edited video.) 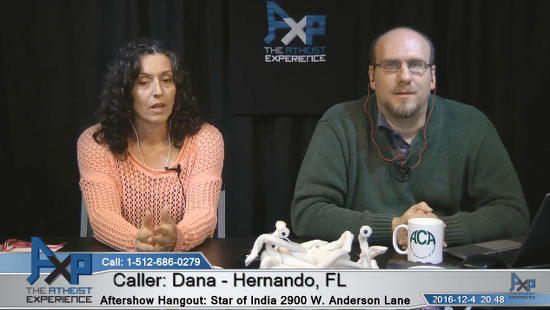 She and her sister are both “suffering from illnesses” right now and nearing the ends of their lives. When they spoke on the phone last week, her sister confronted her about her alleged atheism, telling Dana, “I want you to know you’re going to Hell, and I don’t want to go to Heaven without you, and you better get right with God.”

Dana had been in the closet about her atheism for several years at this point but that conversation brought her to tears. Would could she do? Lie about her atheism? She had no way to respond to her dying sister without creating a rift between them in the little time they had left. The condemnation may have been well-intentioned but it came off as threatening and intimidating, and Dana is under more stress now than ever before.

Hosts Russell Glasser and Tracie Harris handled the situation well. It’s just sad to hear anyone suffering this much for daring to question religious dogma. Dana said her sister was her idol growing up, and hearing the sister lash out at her like this left her with little recourse. That’s when she decided to call the show.