There’s some speculation by right-wing websites that Rep. Thomas Massie, a Republican Congressman from Kentucky, could become either the director of the White House Office of Science and Technology Policy or the next Secretary of Energy. It would be a disturbing pick by Donald Trump (surprise!) in part because Massie denies the science behind climate change. 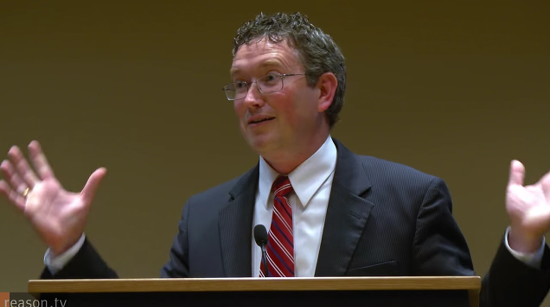 But here’s another reason to be concerned: Massie is one of the few government officials to visit Creationist Ken Ham‘s Noah’s Ark theme park since it opened and he apparently took the opportunity to revel and bask in its pseudoscientific glory. Here’s what Ham wrote after Massie’s visit:

… at least two congressmen have visited the Ark. The latest, Congressman Thomas Massie (who represents our region of Northern Kentucky in Washington, DC), walked through the Ark with me last Friday.

In describing the Ark, Congressman Massie used a word we are hearing most often from our guests about the 510-foot-long ship: “amazing.” He added that the massive Ark “exceeded my expectations,” a phrase we also get from many of our guests.

There’s nothing “amazing” or exceptional about a $100 million attraction dedicated to misinforming the public about where we all came from, and it’s appalling that any elected official would offer any kind of praise to this travesty. Even if it’s in his own District.

You might think Massie’s a good choice for leading any sort of science-related department given that he graduated from MIT and is known as a pro-solar energy member of Congress, but Dr. Ben Carson is a brilliant neurosurgeon who has repeatedly shown that he knows next to nothing about any other subject. Massie may know a lot about energy, but that doesn’t make him a credible authority on science.

December 5, 2016
James Randi: Donald Trump "Doesn’t Know Anything" and Is Just a "Blowhard With a Bad Wig"
Next Post

December 5, 2016 A Dying Atheist Tells a Heartbreaking Story About Being Condemned By Her Religious Sister
Browse Our Archives
What Are Your Thoughts?leave a comment