The Military Religious Freedom Foundation says that one of the coaches of the Air Force Academy’s football team, Steed Lobotzke, is using his Twitter account to illegally proselytize. 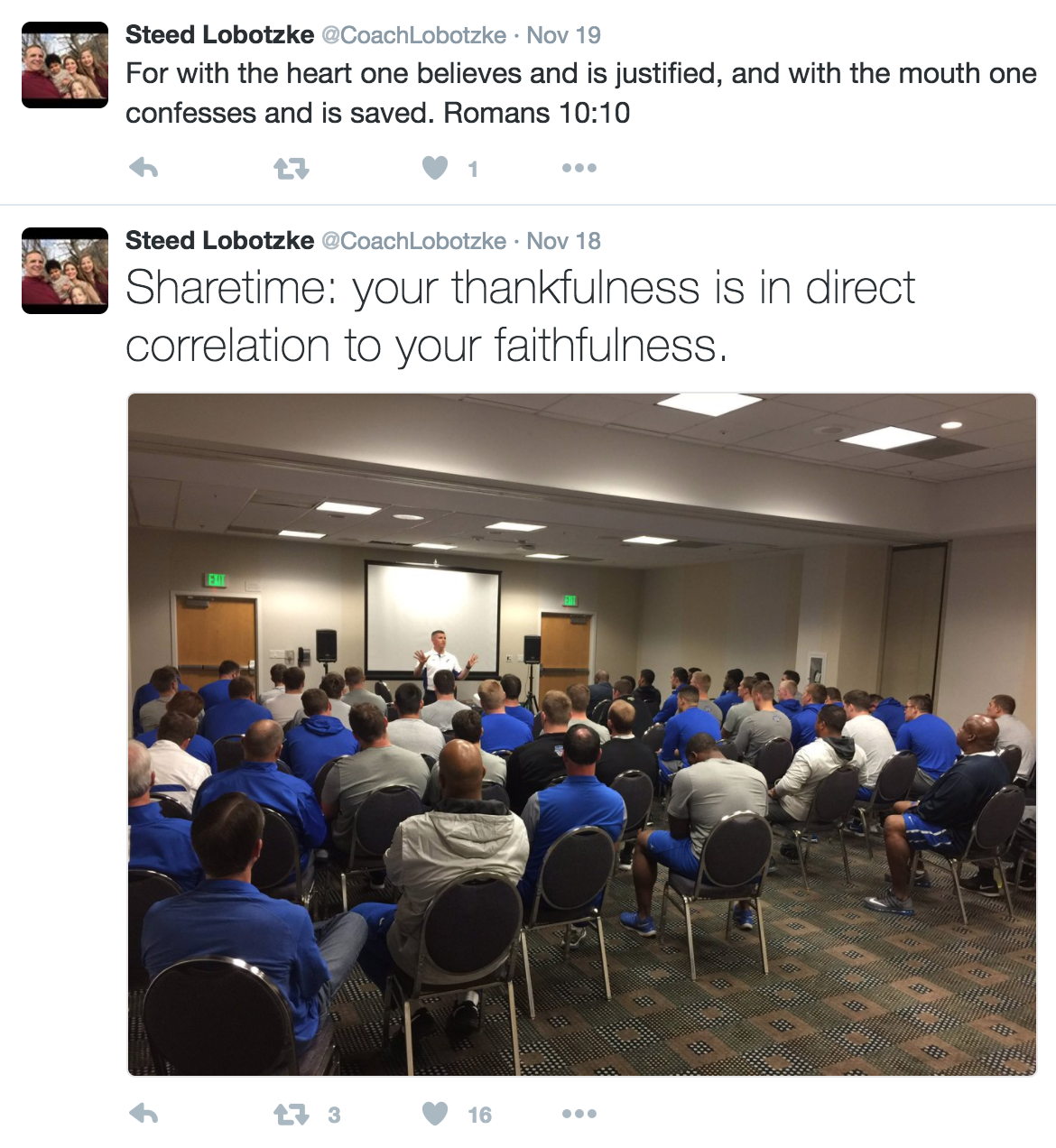 Unlike a typical public university’s football coach, MRFF’s Mikey Weinstein says that Lobotzke must follow AFA regulations which say individual expressions of religious beliefs are okay “unless those expressions would have an adverse impact on military readiness, unit cohesion, good order, discipline, health and safety, or mission accomplishment.” And preaching Christianity using the same Twitter account promoted by the team’s website and on which Lobotzke proudly displays his affiliation with the AFA team runs afoul of that regulation.

It’s not the first time an AFA football coach has promoted Jesus while using the authority of his position, Weinstein said in a email:

“Twelve-plus years ago, Air Force Academy Head Football Coach Fischer DeBerry proudly and boldly displayed a large banner across the main locker room of the football team which stated ‘We Are All Members of Team Jesus Christ. We Are First and Last Christians.’ At least THAT unconstitutional horror of fundamentalist Christian tyranny occurred before the advent of social media. He intentionally and unlawfully marked that place for Jesus, just as a dog marks a tree, despoiling with reckless abandon the Constitution along the way.

Today, the Air Force Academy senior leadership clearly shows that unchecked Christian extremism is worse than ever at the Academy, especially on its football team, with the shocking discovery of what the football team’s Tight Ends Coach, Steed Lobotzke, a 1992 USAFA grad, has been doing with his official USAFA football twitter account. Lobotzke’s official twitter feed is filled with illicit proselytizing in the name of Jesus Christ and even includes such biblical citations juxtaposed with pictures of official football team meetings. Unconstitutional filth, thy name be Steed Lobotzke.

MRFF is representing 5 members of the Academy’s Athletic Department and 3 members of its ‘Fighting Falcon’ football team as complainants who have come forward on this latest disgrace to the Constitution of unlawful, fundamentalist Christian supremacy. MRFF legal counsel plan to file an official Inspector General Complaint with the DoD/IG on Monday as MRFF’s experience with the Academy’s own IG and the Air Force IG at the Pentagon on the Air Staff has proved both organizations to be less than worthless in protecting the precious freedoms guaranteed by the separation of Church and State in our nation’s Constitution.”

It’s possible that adding a simple disclaimer to his Twitter profile saying his tweets don’t reflect the views of the Air Force Academy could help. But MRFF may still have a legitimate concern as long as Lobotzke uses the same Twitter profile — with his handle being @CoachLobotzke — to promote both his team and his religious beliefs.

For what it’s worth, there is an actual, official, verified AFA football Twitter account that’s free of religion. But MRFF has been successful in previous attempts to prevent military officials from using their titles to promote their personal faith.

December 3, 2016 President Obama Says at Tree Lighting Event That Believers and Non-Believers Honor the Golden Rule
Browse Our Archives
What Are Your Thoughts?leave a comment