On Tuesday, Donald Trump announced that he’d picked Rep. Tom Price (R-GA) as the next Secretary of Health and Human Services, and boy is this one ever a beaut! 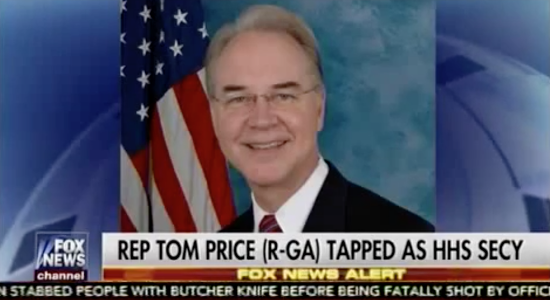 Rep. Price was selected specifically because of his outspoken opposition to the Affordable Care Act, with the hope that he would help “dismantle it and help Republicans implement their own blueprint for health care reform.”

You would think that after eight years of screaming about Obamacare, Republicans would have gotten it together by now to find an alternative they could all agree on, but no. Price put his own Plan B together once, called the “Empowering Patients First Act,” in which everything just goes back to the way it was, except maybe some people could get tax credits, but couldn’t find anyone else to endorse it.

But letting him run the HHS would be frightening, given that Price is a pretty scary dude. MSNBC’s Steve Benen explains:

I’ve been following Price’s career for years, and it’s hard to overstate just how conservative he is on, well, practically everything. The Georgia congressman, for example, is virulently anti-gay; during the BP oil spill, Price sided with the oil giant; and in 2011, he helped create Congress’ Tea Party Caucus. (A year later, Price seemed confused about the meaning of the word “compromise.”).

In addition to all of this, Price is a member of an elite club of doctors called the Association of American Physicians and Surgeons (AAPS). Sounds normal, right? Just like a regular old American doctor organization! Except not, because it’s more like a Tea Party Doctor group that existed before the Tea Party came into power. It bears a striking resemblance to the American College of Pediatricians, the misleading and conservative version of the much more credible American Academy of Pediatrics.

As Mother Jones‘ Stephanie Mencimer noted in a 2009 profile on the AAPS group,

… despite the lab coats and the official-sounding name, the docs of the AAPS are hardly part of mainstream medical society. Think Glenn Beck with an MD. The group (which did not return calls for comment for this story) has been around since 1943. Some of its former leaders were John Birchers, and its political philosophy comes straight out of Ayn Rand. Its general counsel is Andrew Schlafly, son of the legendary conservative activist Phyllis.

Notably, the group virulently opposed Hillary Clinton‘s efforts towards establishing a single payer system in this country. But not just that! They oppose not only regular Medicaid and Medicare, but also third party insurance groups — instead believing that medical care should be a “cash and carry” system, where the doctor charges you directly for whatever care you need, and then you pay them directly. Which means they’re of the mind that only rich people deserve to not be sick.

But that’s not all! The AAPS also promotes the idea that vaccines cause autism and that “shaken baby syndrome” is a condition caused by vaccines! Trump, of course, is also on Team Vaccines-Cause-Autism and even met with discredited researcher Andrew Wakefield (who started this whole “vaccines cause autism” thing in the first place) over the summer for a chat.

The publication’s archives present a kind of alternate-universe scientific world, in which abortion causes breast cancer and vaccines cause autism, but HIV does not cause AIDS. Cutting carbon emissions represents a grave threat to global health (because environmental regulation would make people poorer and, consequently, sicker). In 2005, the journal erroneously claimed that illegal immigration had caused a leprosy epidemic in the US, a claim that was reported as fact in more mainstream outlets such as Lou Dobbs’ show.

They also don’t believe in the concept of peer-reviewed science or scientific consensus on anything! Because they’re just real whimsical that way. Basically, they think doctors should do whatever they want, without regard to what has been proven effective or not, regardless of potential dangers.

The AAPS statement of principles declares that it is “evil” and “immoral” for physicians to participate in Medicare and Medicaid, and its journal is a repository for quackery. Its website features claims that tobacco taxes harm public health and electronic medical records are a form of “data control“ like that employed by the East German secret police. An article on the AAPS website speculated that Barack Obama may have won the presidency by hypnotizing voters, especially cohorts known to be susceptible to “neurolinguistic programming” — that is, according to the writer, young people, educated people, and possibly Jews.

Yes, that was a real thing! Obama might have hypnotized people simply by virtue of his first name starting with an “O,” which is the very same shape as a crystal ball, don’t you know. (See also: literally every other round thing on earth.)

Obama’s logo is noteworthy. It is always there, a small one in the middle of the podium, providing a point of visual fixation. Unlike other presidential logos, one looks through it, not at it. It might just be the letter “O,” but it also resembles a crystal ball, a favorite of hypnotists.

Obama is clearly having a powerful effect on people, especially young people and highly educated people — both considered to be especially susceptible to hypnosis. It is also interesting that many Jews are supporting a candidate who is endorsed by Hamas, Farakhan, Khalidi, and Iran.

Hand gestures can be used as hypnotic anchors, or to aid in hypnotic command implantation. They can be difficult to distinguish from innocent gestures used for emphasis. Obama, however, uses some gestures extraordinarily often and for very specific words such as “believe” and “chose.” His characteristic thumb-and-forefinger gesture looks like a hand holding a pencil — as if you were in a voting booth. The gesture of pointing sends the subconscious message that a person in authority is giving a command.

Not to encourage ethnic stereotypes here, but I talk with my hands a whole lot. For what it’s worth, I am pretty sure I haven’t ever successfully hypnotized anyone that way. I’ve accidentally whacked people in the head a few times, but no hypnotizing that I am aware of.

Not only was this hypnotism piece an article on the site, it was also the subject of a full 66-page “unsigned” article endorsed by the group.

And Tom Price, a man who belongs to this group, is likely going to head up Health and Human Services.

(via Raw Story and Mother Jones. Image via YouTube)

December 2, 2016
Atheists Erect "There Are No Gods" Sign and Secular Nativity Scene in Wisconsin Capitol Building
Next Post

December 2, 2016 Pennsylvania City Agrees to Replace Veterans Memorial Bench That Denigrates Atheists
Browse Our Archives
What Are Your Thoughts?leave a comment