Seven People Have Died from the Tennessee Wildfires, But At Least This Statue of Jesus Is Okay! December 1, 2016 Hemant Mehta

Seven People Have Died from the Tennessee Wildfires, But At Least This Statue of Jesus Is Okay!

The East Tennessee wildfires have already taken seven lives and caused an incredible amount of destruction to homes and other buildings… but don’t worry about all that, because in one home, a statue of Jesus was merely charred.

It must be a sign that God loves us! 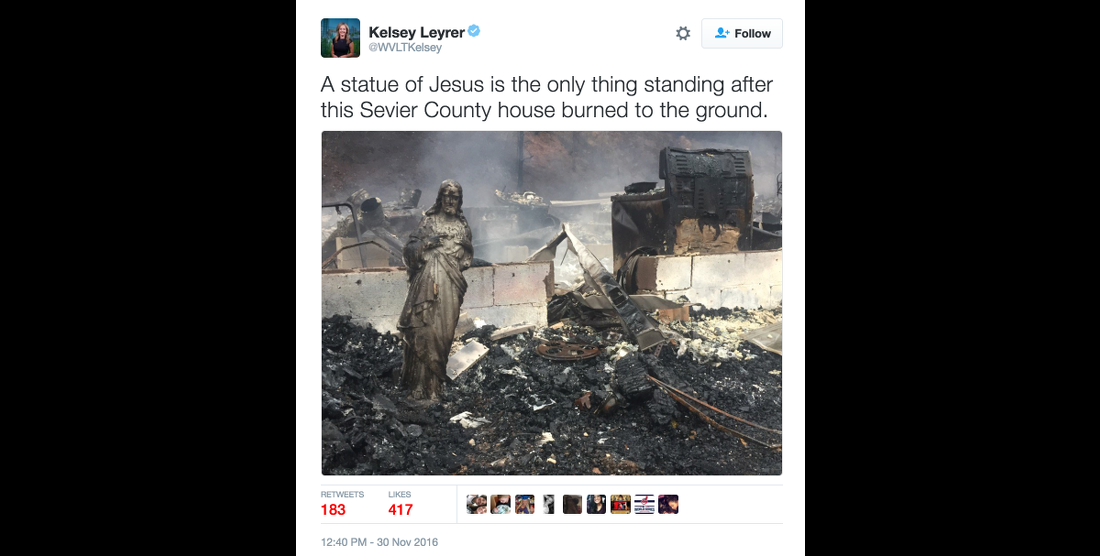 … On Wednesday, reporter Kelsey Leyrer and her team captured footage of what they saw at a house out in Sevier County. It was a statue of Jesus — covered with soot and ashes, but still standing. It was the only thing left after the home burned to the ground.

At least seven people have lost their lives in the wildfires that have ravaged Sevier County and Gatlinburg this week.

You have to roll your eyes at the last paragraph there. Look at this statue!… and, oh, by the way, a bunch of people also died.

I’m not sure what message Christians think God was sending here… He destroyed the home, forced families to evacuate, killed several people, will force companies to shell out millions of dollars in recovery efforts, but not totally destroying that statue is supposed to show that He loves us?

Here’s a thought: A kinder, more compassionate God would’ve taken the statue and protected the lives of the seven people who died.

But what do I know? I’m just an immoral atheist.

December 1, 2016
Ohio Judge Rules Against Atheists Who Sued to Remove "In God We Trust" from U.S. Currency
Next Post

December 1, 2016 Satanic Activist Reveals Trump-Themed Festivus Pole Which He Hopes To Set On Fire
Browse Our Archives
What Are Your Thoughts?leave a comment