A 25-year-old Michigan man who smashed into several parked cars (before pulling two fire alarms at a local motel) allegedly told witnesses that “the Devil made him do it.” 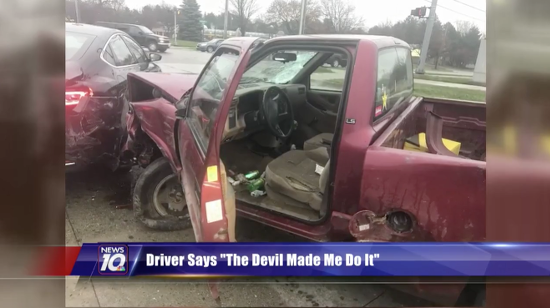 It all happened yesterday morning in East Lansing:

A man drove his pick-up off a highway ramp, smashed into parked cars, and hit cars driving down Lake Lansing Road.

“At first I thought he swerved off the road like normal but then I saw him continue so I assumed that there was something wrong with him,” Cel Bernal, a cook at the café who saw the entire incident unfold.

Witnesses that were at the scene tell News 10 the driver told him ‘the devil made him do it.’

… the suspect then fled on foot to the nearby Hampton Inn location.

The clerk inside tells News 10 the driver asked for the room number ‘666’.

The driver also damaged two fire alarms on the second and third floor.

He was soon arrested and is currently in police custody. There’s no official word about his mental health or whether he was on any drugs. But he clearly should’ve let Jesus take the wheel.

(Thanks to Kurtis for the link)

December 1, 2016 You Are Going to Die... and That's Okay
Browse Our Archives
What Are Your Thoughts?leave a comment