Why the Philosophy of Religion Should No Longer Be Taught November 30, 2016 Hemant Mehta

Why the Philosophy of Religion Should No Longer Be Taught

We would all laugh at the idea of Creationism being taught as part of a university’s science curriculum, yet many philosophy programs include classes on religion. Author John Loftus argues in his latest book Unapologetic (Pitchstone Publishing, 2016) that the philosophy of religion needs to end. We should take it no more seriously than a class on the philosophy of fairies. 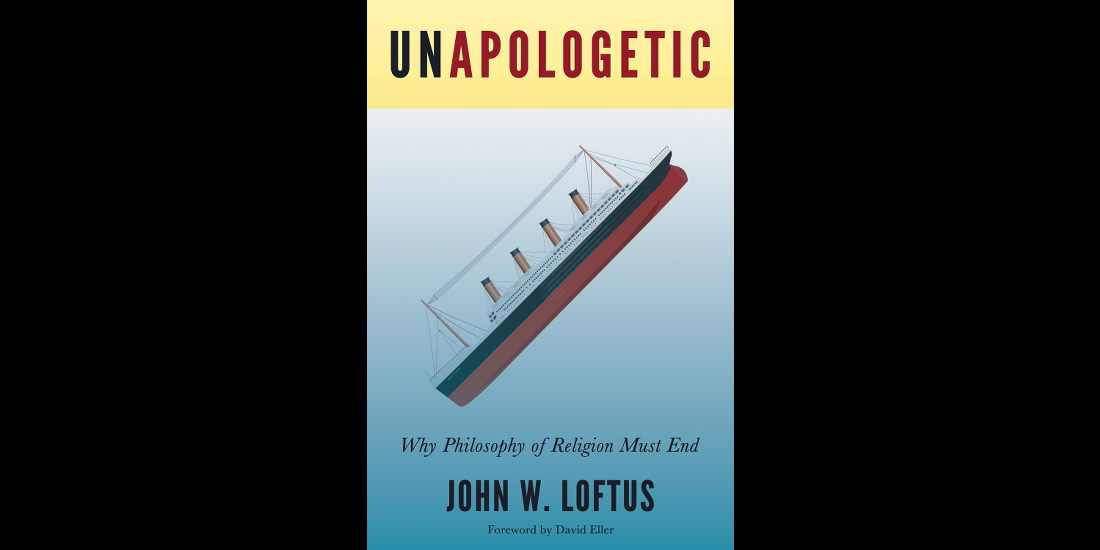 In the excerpt below, Loftus lays out his argument for why we should no longer take this discipline seriously:

Just consider what the philosophy of religion would be like if no “revealed” religion ever existed. No written revelation was compiled either. No scriptures were ever written down. There never was a Bible, or a Koran, or a Bhagavad Gita, or a Book of Mormon. The only god worthy of being discussed in philosophy of religion classes would be a philosopher’s god—one that was uninformed by the content of any ancient prescientific “sacred” text or current religion. What would there be to discuss? What would a class on the history of philosophy of religion look like if that was the only god to discuss? In our scientific era what could justify having a whole subdiscipline on such a god or goddess when there are other disciplines we could look to for answers? Well then, here too, this book is a call to wake up. There really are no sacred scriptures. They do not exist. No deity inspired anything because no deity exists. All so-called revealed religions are false.

So upon the reasonable overwhelmingly probable evidence-based supposition that the philosophy of religion is little more than a history of discussing the rationality, existence, attributes, and actions of fairies, and that there never was, is, or will be any sacred scriptures or revealed religions, what should atheist philosophers of religion think about their own discipline? What are they doing in their classes? What should be the objectives or aims of a philosopher teaching classes about the rationality, existence, attributes, and actions of fairies? In a syllabus for any college class the professor must state his or her objectives, or aims. What are they? That is the question I am raising. If you share my conclusion you should agree with me that the philosophy of religion must end.

Applying this line of argument specifically to the various sects within Judeo-Christianity, the philosophy of religion must end because biblical studies must end. Biblical studies must end because the evidence is decisive: the bible god, his wife, sons, and daughters, angels, demons, and other superhuman entities originated in the ancient prescientific superstitious past by mythmakers who were clueless about reality.

The precise nature of my call is to end the philosophy of religion discipline in secular universities. It basically follows the same strategy Dr. Hector Avalos advocates in his book titled The End of Biblical Studies. Avalos argues that religion professors and those teaching in biblical studies departments should tell their students the truth about the Bible even though it’s considered sacred to many of them. Essentially his call is to debunk the Bible for the good of any future society we might have. So similarly, I’m calling upon philosophy of religion professors to do likewise with the arguments to the existence of God. They should essentially try to put themselves out of a job by arguing against faith, even though the philosophy of religion discipline may not go away anytime soon. In its place philosophy proper can take over the relevant discussions, as can scientific fields that teach us about evolution, the human mind, and the universe. Religion-focused subdisciplines in other academic fields that treat all religious faith-based claims equally should continue, such as comparative religion, anthropology of religion, and psychology of religion.

If subjects such as biology, chemistry, physics, and geology are taught without relying on faith-based superhuman forces as explanations, then using these faith-based explanations isn’t legitimate in the secular university in any other discipline either. Just as creationism isn’t a legitimate subdiscipline of biology, neither should the philosophy of religion be a legitimate subdiscipline of philosophy. Philosophy of religion is pseudo- philosophy since it isn’t dealing with any objective evidence.

Unapologetic: Why Philosophy of Religion Must End is now available on Amazon.

November 30, 2016
A Former Orthodox Jewish Woman Explains How She Had to Take Her Panties to a Rabbi for Inspection
Next Post