President-Elect Donald Trump: Flag Burners Should Lose Their Citizenship or Be Jailed

This morning, President-elect Donald Trump, in a likely attempt to distract people from his current and future scandals or disastrous Cabinet appointments, tweeted that people who burn an American flag could lose their citizenship or face jail time.

Let’s get this out of the way: Flag burning is legal. The Supreme Court said in 1989 that it’s a protected form of political speech. It’s also an expression of free speech, protected by our First Amendment. You don’t have to like it, but protecting unpopular speech is precisely why we have the First Amendment.

(Side note: Hillary Clinton co-sponsored a bill in 2005 that would have criminalized flag burning. She was rightly denounced for it and the bill went nowhere.)

Gold Star parent Khizr Khan was right to ask if Trump had ever read the Constitution. Either he hasn’t or he doesn’t give a damn. Both options are frightening, and all the more notable when we’re ending the second term of a popular President who once taught classes on the document.

But why throw this possibility out there? Perhaps Trump expects liberals to react to his comment by burning flags… which would inevitably draw attention away from his other actions. New York magazine’s Jonathan Chait explained it this way:

A fight over patriotism and citizenship frames the president-elect as the champion of American nationalism — giving a kind of legitimacy that overcomes his defeat in the national vote, much as standing on the rubble at Ground Zero erased all complaints about George W. Bush governing from the right after losing the national vote. There may not be flag-burners to fight at this very moment, but surely the president highlighting the issue will encourage protesters to burn flags in defiance, drawing media attention. Thus the opposition will demonstrate that their hatred for Trump is actually hatred for the country. And he will proceed to enrich himself and his party’s donor class. 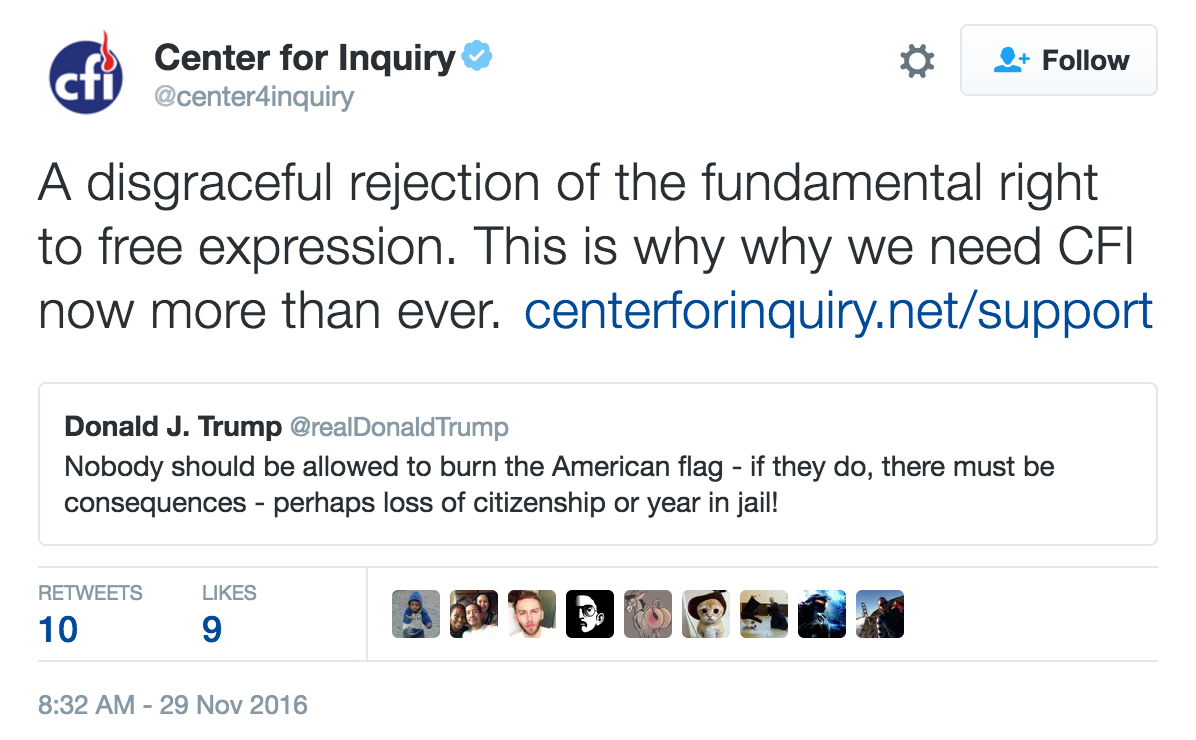 Needless to say, as this whole controversy is discussed and debated today, keep an eye on what else Trump is doing. We know how he plays the game by now. While everyone else is focused on his dangerous comment, he’ll assert his powers in a far more disturbing — and far less theoretical — way.

November 29, 2016
The Story of King Solomon (As Explained By An Atheist Who Actually Read the Bible)
Next Post