I mentioned yesterday that Australia’s Royal Commission into Institutional Responses to Child Sexual Abuse just released its report on the Jehovah’s Witnesses and found that children were not “adequately protected from the risk of sexual abuse” within the organization.

Lloyd Evans, a former Witness who knows a lot more about the ins and outs of the religion, has now posted a video going into more detail about what the report says. 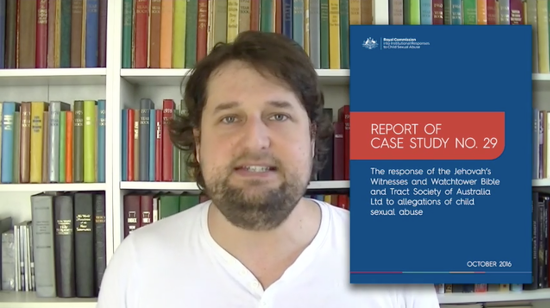 The real tragedy is that for both victims and Watchtower alike, most of this could have been avoided. The light at the end of the tunnel is the assurance that the unbiased investigation and exposure of Watchtower’s destructive policies will certainly lead to the awakening of countless individuals who have placed their trust in an organization that has victimized its own adherents.

I’d like to think he’s right about that last part, but I’m not so sure. People have been exposing religious hypocrisy and bad behavior for a long time and some people refuse to accept any of it. They’re perfectly happy inside their bubble and don’t want anything popping it.

November 29, 2016
Trying to Make Sense of the Fahrenheit Temperature Scale
Next Post

November 30, 2016 A Memorable Letter to the Editor Asks What It Really Means to Convert to Christianity These Days
Browse Our Archives
What Are Your Thoughts?leave a comment