Televangelist Rick Joyner on Jesus’ Disciples: “Every One of Them Were Donald Trumps” November 28, 2016 Hemant Mehta

Televangelist Rick Joyner on Jesus’ Disciples: “Every One of Them Were Donald Trumps”

Televangelist Rick Joyner, who has previously said evolution is impossible and that we haven’t had any hurricanes since Katrina, is back with an even more eye-popping statement.

On a recent episode of his Prophetic Perspectives on Current Events show, Joyner argued that Donald Trump is “one of the most honest people I’ve met,” adding that Jesus chose disciples who were just like Trump.

As if we needed another reason to dismiss the Bible. 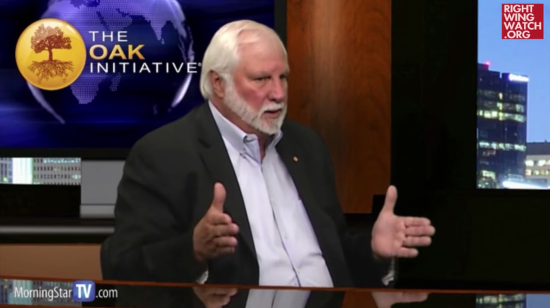 Joyner insisted that Trump is also “one of the most honest people I’ve met” and that he posseses a “remarkable fear of the Lord,” so much so that he fired his campaign manager (presumably Paul Manafort) after learning that “this guy was cutting off these Christian leaders from being able to contact him.”

“When he heard that, the guy was gone right away,” Joyner said.

“If you look at the disciples that Jesus chose, they were all Donald Trump,” Joyner later declared. “Every one of them were Donald Trumps.”

There’s no evidence that any of Trump’s campaign managers — including Corey Lewandowski and Paul Manafort — were fired because they blocked access to Trump from Christian leaders. If anything, Trump had all-too-frequent communication with them.

Joyner made similar remarks about Jesus’ disciples being like Trump earlier this year. At the time, he also said “Donald Trump may be one of the most humble of the candidates”… The delusion runs deep in that man.

Though I’ll grant him this: Joyner is a televangelist who fraternizes with others in his profession. That means Donald Trump may very well be one of the most honest people he’s ever met.

November 28, 2016 Homeschooling Christian Mother Can't Handle Her Son Seeing a Male CoverGirl Model on TV
Browse Our Archives
What Are Your Thoughts?leave a comment