In a disturbing display of bigotry against Muslims, three California mosques were sent a hate-filled letter from an alleged Donald Trump supporter. The Council on American-Islamic Relations (CAIR) posted the image and called for an investigation into the matter: 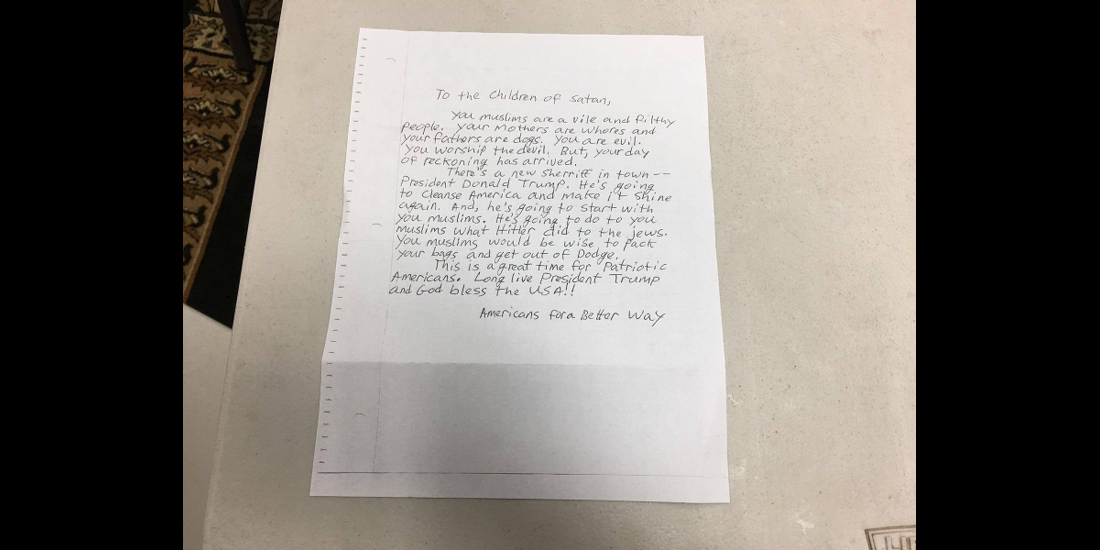 The hate letter was addressed to the “Children of Satan.” The writer of the letter called Muslims a “vile and filthy people” and called on them to “pack your bags and get out of dodge.” It also said that President-elect Donald Trump is “going to cleanse America and it make it shine again. And, he’s going to start with you Muslims” and “This is a great time for patriotic Americans. Long live President Trump and God bless the U.S.A.”

“This hate campaign targeting California houses of worship must be investigated as an act of religious intimidation, and our state’s leaders should speak out against the growing anti-Muslim bigotry that leads to such incidents,” said CAIR-LA Executive Director Hussam Ayloush.

The letter also said Trump would “do to you Muslims what Hitler did to the Jews.”

Trump himself has said nothing about the letters, choosing instead to tweet lies about how supposed voter fraud led to millions of additional votes going to Hillary Clinton.

Needless to say, anyone targeting Muslims as if they’re all terrorists ought to be universally condemned. There’s a reasonable debate we can have about Islamic doctrine and how people interpret it, but anyone who goes after believers instead of the beliefs is despicable.