The Franklin Township School Board in Indiana just got sued for opening up meetings with a Christian prayer, something that is undoubtedly illegal. 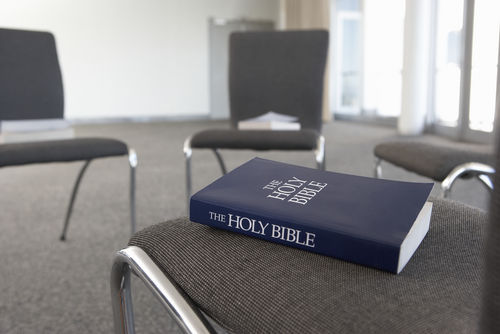 According to the lawsuit filed by the ACLU of Indiana on behalf of Marion County resident Dr. Duane Nickell:

… The prayers are Christian in orientation, mentioning Jesus or Christ. While the Supreme Court has held that sectarian prayer to open a legislative session is not per se unconstitutional… the Court stressed in the case, which did not concern prayer by a school board, that in selecting the person to deliver the prayer the legislative body maintained a policy of nondiscrimination, welcoming all faiths. Here, the prayer is by a school board, there is no policy of nondiscrimination, and defendant’s prayer practices violate the First Amendment of the United States Constitution.

To put that in English, the Supreme Court said in Greece v. Galloway that local governments could allow prayers at meetings, as long as that opportunity extended to anyone who wanted to give one. (Atheists and Satanists still have to fight for the right to deliver invocations in many places, but the law is on their side.) However, that ruling did not apply to school boards, and the law against prayers at those meetings still stands.

The District issued no public response to the lawsuit — but they’re clearly in the wrong here. The question is whether they want to waste taxpayer money fighting this battle in court.