Televangelist Jim Bakker recently showed his audience a map of how various counties voted in the presidential elections. As you might expect, there was a lot of blue on the coasts (in addition to large cities in the midwest) with large swaths of red everywhere else.

Then, while selling his giant buckets of food, Bakker made a prediction: All those counties that voted for Hillary Clinton and her liberal policies — thereby committing sins against God — would be punished with earthquakes. 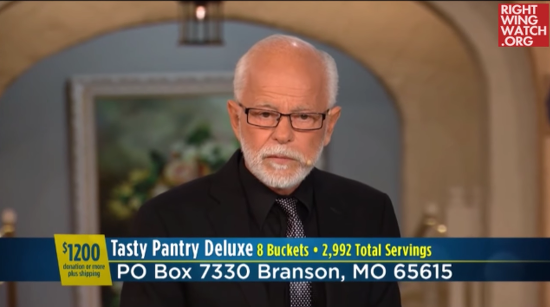 Bakker pointed to a map that showed the results of the election by county and said that “if you live in the blue — any spot that’s blue — I would say, ‘Oh God, help me. Oh God forgive me.’ Because those are the ones who came against the will of God in this election.”

“I just want to tell you, God has spoken to me, I’ve seen under the ground in California, in LA, and God spoke to me that in Los Angeles alone there is going to be such an earthquake come that literally the big buildings will be laying on their sides, all of LA is going to collapse,” he added.

The funny thing is that we know a major earthquake will hit the Pacific Northwest in the not-too-distant future. But Oregon and Washington — not Los Angeles — have the most to lose when that happens. Bakker was slightly off with that prediction.

What about Chicago and New York City, though? They voted for Clinton and those aren’t exactly earthquake-prone areas…

And what about states like Oklahoma and Kansas, which voted for Donald Trump and are frequently ravaged by tornadoes? Shouldn’t they be worried, too? Bakker didn’t mention them.

It’s almost like he made a prediction that was bound to come true, at least in part, at some point in the future so that he could take credit for it when it happens… while ignoring all the holes in his arguments.

Anything to sell more buckets, I guess.

November 23, 2016
This Song Matches Up With Whatever These Preachers Are Doing
Next Post