You may have heard that there was a horrific accident on Monday involving a school bus in Chattanooga, Tennessee. 24-year-old driver Johnthony Walker was apparently speeding when everything went wrong: 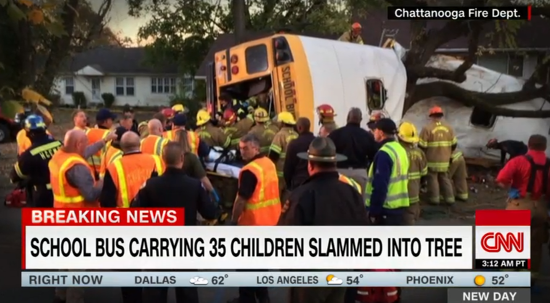 “Based on witness statements and physical evidence, the defendant was driving the school bus at a high rate of speed, well above the posted speed limit of 30 mph,” his arrest warrant affidavit says.

“Mr. Walker lost control of the bus and swerved off of the roadway to the right, striking an elevated driveway and mailbox, swerved to the left and began to overturn, striking a telephone pole and a tree.”

Five children are dead with a dozen more in the hospital.

And after all this, what did Walker’s mother say to the press?

That this was just part of God’s Master Plan.

“My heart of love is going out for all that was in harm’s way of God’s will,” she said. “Sending out mine and our condolences to every family that God touched yesterday in this horrible accident. And I am asking for compassion also for my son.”

I know she’s traumatized. I know she’s looking for any kind of excuse to lessen her son’s complicity in all this. But to say God’s Daily Planner for Monday included the line “Let’s kill five innocent children coming home from school” is a slap in the face to those kids’ families. It also suggests nothing could’ve been done to prevent this accident — which is just not true. Better training, better driving, better awareness of his surroundings all could’ve helped.

Another prayer? Not so much.

Walker faces multiple counts of homicide and recklessness. God hasn’t been charged with anything. That’s just as it should be. Whether he made a terrible mistake or wasn’t paying enough attention to the road, Walker deserves 100% of the blame here. God had nothing to do with it.

November 23, 2016 PA High School Football Coach Will No Longer Pray with Players, Says New Superintendent
Browse Our Archives
What Are Your Thoughts?leave a comment