Earlier this month, I posted about Jack Henzes, the head football coach at Dunmore High School in Pennsylvania, who had prayed with his team for several decades before someone contacted the Freedom From Religion Foundation asking to help put a stop to the promotion of Christianity. 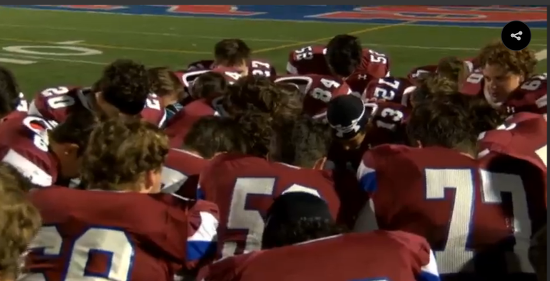 My complaint at the time was that the media was spinning the story as atheists trying to suppress freedom of religion — even though FFRF insisted that students had every right to pray. The problem was the coercive nature of the coach’s participation.

FFRF sent a letter to the District back in June and they finally received a response from the new superintendent. He says that the coach-led prayers are no more:

“The school district has addressed this issue,” Superintendent John Marichak, who replaced McDonald in July, said in his recent reply. “We directed Coach Henzes to be sure that he should not partake in any such behavior. We also covered this with all of our personnel to be consistent and exhaustive in the upholding of the law.”

FFRF appreciates that its counsel was taken seriously.

“Regardless of the length of the time he was engaging in the activity, Coach Henzes was clearly overstepping legal and constitutional boundaries with his public prayerfulness,” says FFRF Co-President Annie Laurie Gaylor. “We’re glad that the Dunmore School District gave him a talking to about his conduct.”

I hope someone’s keeping an eye on Henzes to make sure he’s living up to his promise, but this is exactly what the District should’ve done months ago. There’s no justification for allowing a coach to pray to Jesus with players, just as no public school teacher should be telling students God doesn’t exist.

November 23, 2016
School Bus Driver's Mother Says It Was "God's Will" That Her Son's Accident Killed Five Kids
Next Post

November 24, 2016 Richard Dawkins' Recent Public Conversation with Matt Dillahunty Is Now Online
Browse Our Archives
What Are Your Thoughts?leave a comment