Teacher Who Promoted Christianity in Class, Then Cried Persecution When Told to Stop, Loses Appeal

In early 2013, we learned that Joelle Silver, a science teacher in the Cheektowaga Central School District in New York who also doubled as the faculty sponsor for the school’s Bible Study Club, had no idea where to draw the line between being a public school teacher and being a representative of her church. 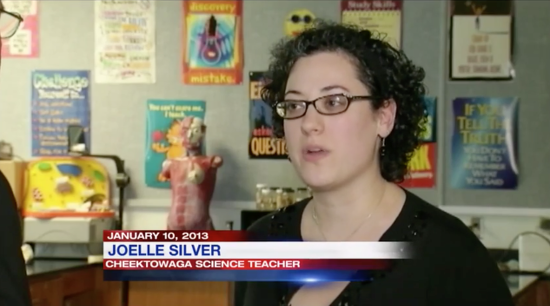 Silver also invited Dr. Luther Robinson, MD to speak to her Anatomy & Physiology class last spring and his slides included ones with Bible verses on them — something Silver would have known about since she told the school she reviewed his materials in advance.

(Can you imagine what the response would have been like if Silver were Muslim, with verses from the Qur’an lining her walls? Or an atheist, with quotations from Christopher Hitchens greeting students each day? It’s only in situations like these, with a Christian proselytizer, that we even have to debate whether or not this should be allowed.)

That warning was incredibly generous. In most cases, a teacher who broke that many rules would be out of a job.

And I know I had a completely different question: How on earth was Silver a science teacher?

Or, rather, how did Silver respond to the overwhelming amount of evidence showing her promoting Christianity to her students?

Then, she filed a federal lawsuit against the district with the help of the American Freedom Law Center. As if the District was infringing upon her rights.

The district wasn’t being anti-Christian; they were pro-neutrality (and anti-getting-sued). They asked of Silver the same things they ask all other teachers when it comes to promoting their faith on the taxpayer’s dime.

But Silver felt she was being persecuted.

No one died so that Silver could preach to students who had no choice in the matter.

That’s why, in mid-2014, two years after the whole saga began, a judge finally ruled against her. Kind of…

Unfortunately, the lawsuit, we were told, could proceed on the basis of selective enforcement of the rules:

I didn’t buy the idea that Silver was treated unfairly. While administrators were right to go after a teacher who overtly promoted Christianity in the classroom, they hardly needed to criticize a teacher who puts up a picture of a rainbow to promote acceptance of all students.

In any case, that wasn’t the result the right-wing AFLC wanted. They wanted the judge to say Silver’s religious rights were being violated and they went off against the judge as if she was some biased anti-Christian judicial activist:

There was no hostility to religion here. There was only an administration looking out for the best interests of the students (regardless of their beliefs) and themselves. Maybe Silver just didn’t know any better, but you’d at least expect her lawyers to realize what the legal boundaries are and how badly Silver crossed them. If they can’t recognize that she went overboard, then they’re part of the problem.

Silver eventually appealed the ruling against her, but I’m happy to tell you that even the appeals court ruled against her.

In a ruling that mirrors the lower court decisions that also went against Silver, the Second Circuit Court of Appeals in Manhattan rejected her claims that the Cheektowaga Central School District violated her free speech rights and restricted her religious expression.

Silver could always appeal again to the Supreme Court, but the odds they’d take up this case are remarkably low — in part because this is such a clear-cut Establishment Clause violation.

This was always a waste of time and money for her side. Even Jesus can’t save her now.

(Screenshot via YouTube. Large portions of this article were posted earlier.)

November 22, 2016 Atheist Whose Group Called Out School District's Promotion of Christianity Is Now Being Threatened
Browse Our Archives
What Are Your Thoughts?leave a comment