Last week, the Kentucky-based Tri-State Freethinkers sent a letter to the Grant County Schools, asking them to put a stop to the numerous constitutional violations they had documented.

We still haven’t seen a public response from the District just yet, but the atheist group’s leader, Jim Helton, has seen some disturbing messages flood his inbox. 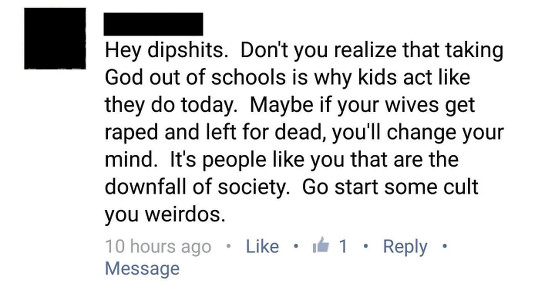 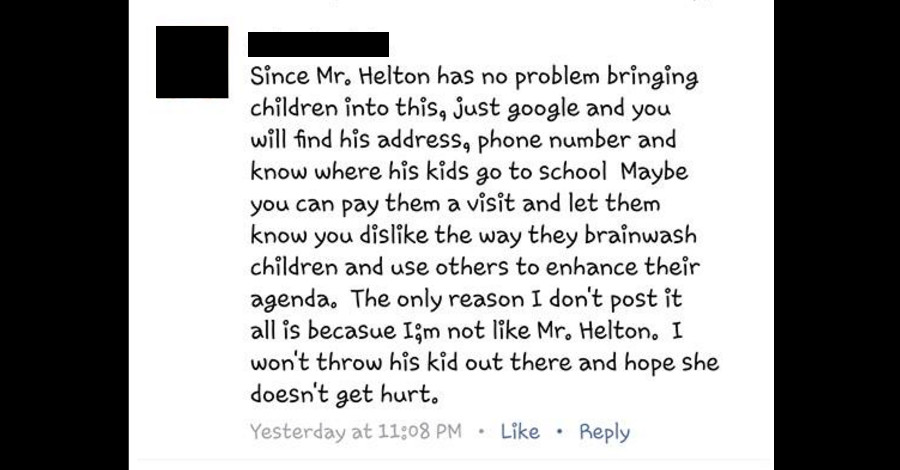 That’s just a sampling. Another message he received was just a picture of a gun.

He told me he’s not entirely surprised by this — religious people are often vicious to atheists whom they falsely accuse of taking away their freedoms — but now that his family members are being targeted, it’s more complicated:

When I created the Tri-State Freethinkers I knew there would come a day when my life would be threatened and I accepted that risk and knew I wouldn’t back down when the day came. But now my wife and kids are at risk and my decisions affect them. I thought it would be unfair to them if they were not part of the discussion. I fully explained to my children what was going on, the threats made against them, and also told them I would understand if they wanted me to stop. Without hesitation they both said no!

As an activist I was so proud of them at that moment for not willing to be intimidated. As a parent I was even more proud that they were willing to stand up for others who could not. Some people have said I am a bad parent and it is all my fault and I am to blame for the threats against my children.

I do take the threats seriously and we have also taken many new precautions to insure their safety. In the long run they will be safer when the local residents and students realize that threats will no longer work against people, the status quo is no longer acceptable, and the students of Grant County will be able to speak out on their own without fear. This is the world I want them to live in. Not one where they have to hide their beliefs and remain silent to an oppressor.

Jim added that he’s also received messages of support — and people have privately messaged him to say they tried to “speak out against the [constitutional] violations but they were intimidated into silence.”

But there are far too many in his community who believe the threats against his family are justified because of what he’s trying to do… which is to make sure the District remains neutral on matters of religion so that all students, religious and otherwise, aren’t coerced into accepting a particular brand of faith.

No one should have to deal with this.

November 22, 2016
Teacher Who Promoted Christianity in Class, Then Cried Persecution When Told to Stop, Loses Appeal
Next Post