Evangelical Speaker Praises Church for Supporting Trump: “You’re Too Nice” to Vote the Other Way

Kim Winston, a reporter for Religion News Service who covers the atheism beat, decided to mix things up last weekend and visit an evangelical church in Phoenix. The election was over, and she was hoping to hear something inspirational (even if it had some supernatural references).

What she heard was something very different. The pastor, a younger man, invited his mentor, an 87-year-old woman, onto the stage to deliver remarks to the congregation. Whatever her intentions, and despite her gender, the words were hardly inspirational to Winston: 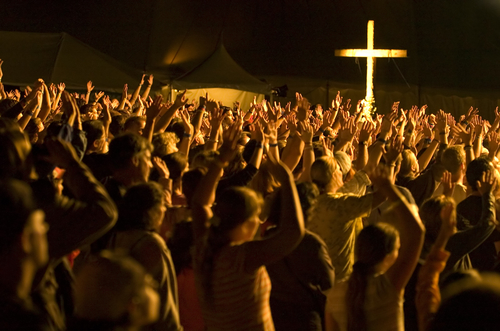 The title of her sermon, she informed us, was “Make Jesus Great Again.” She then described Donald Trump as a “godly man” who is “God’s instrument” and “a miracle” — proof, she said, that a country can “only wallow in sin so long” before God sends a savior. The congregation punctuated her words with scattered “amens” and a couple of “hallelujahs” and, as I looked about me, I noticed that many people — blacks, whites and Latinos — were nodding their heads in agreement. “I know,” she said to the congregation of about 80 people, “nobody in this church voted the other way. You’re too nice.”

It’s that last bit that was really upsetting to Winston. Forget the fake persecution narrative — as if anyone needs to rescue Christians from problems that exist only in their heads — but using the pulpit to say that anyone who voted for Hillary Clinton wasn’t “nice”? (As if supporting an open bigot, racist, misogynist, and unrepentant pseudo-Christian is a badge of honor?)

Who knew inclusion in that church was dependent on your vote? When did Jesus say “Vote for the Republican… or else”?

This shouldn’t happen the other way, either. Even more left-wing Democrats aren’t saying Trump voters were all racists (or even that they were willing to ignore racism); they’re saying many voters were frustrated with politics as usual, felt that Democrats didn’t care about their problems, and thought Trump was willing to work on their behalf. They’ve undoubtedly been conned, but the point is that there’s more to their vote than white nationalism and being anti-Hillary.

And how can a church claim to be a welcoming place to everyone when the person on stage suggests that all the good people must be in lock-step on issues that have nothing to do with the Bible?

There’s a lot of talk about how early exit polls showed that 81% of evangelicals voted for Trump. But even if that’s accurate, that means 19% of them didn’t vote for him. Would they be welcome in this church? Are they not good people in the eyes of fellow evangelicals?

… I left that church last Sunday feeling rebuked, rejected and foolish for thinking that by staying to hear the America I and many other reporters missed, ignored or wrote off, I would find some common ground, some way to hurt less. I did not.

I’m not surprised. The evangelical church as a whole has been on the wrong side of cultural issues for decades now, each one showing how little they care about some of the most vulnerable groups of people in the country. When Trump crashes and burns, as I’m sure he will, don’t forget how the vast majority of evangelicals hitched themselves to the Trump train.